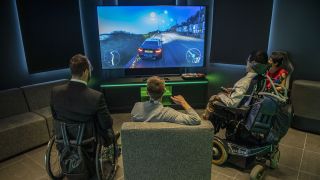 Creating a game requires a process of constant decision making and design rethinks through which the final user experience is plumbed together. It may seem predominantly preference when deciding on the colour of a menu or whether users are able to adjust the HUD, but there is, more often than not, a correct answer. To choose wisely, or to hand that decision over to players, is the key to making games more accessible.

Helping developers make the right decisions are the Xbox Accessibility Guidelines (XAG)—pages with myriad accessibility best practices outlined within. These outline the specific and practical considerations for a developer when building their game to allow disabled gamers to play, including such things as how to display clear text, UI, and game objectives, to even appropriate difficulty options.

A major development for the XAG came earlier this year when Microsoft announced developers can ship their Xbox or PC game over to Microsoft for analysis and validation against the XAG guidelines to see if it’s up to standard as a part of its new Gaming Accessibility Testing Service. With that in mind, it seemed only fitting to speak with Microsoft regarding the XAG and the response it has received from developers so far.

And who better to explain it than Anita Mortaloni, director of Accessibility at Xbox.

“But if you start with accessibility in mind, it isn’t costly and ultimately means more people can play your game.”

The key here being getting in on accessibility early, which Microsoft believes any game dev can do with its library of guidelines and validation. I was curious to see how much of a back and forth there is between Microsoft and developers regarding the XAG and the findings of its testing programme once those initial steps are completed, though.

“Including accessibility in a game isn’t a checkbox or something that is done one time during the game development cycle. We encourage teams to continue to ask questions, co-develop with people with disabilities and iterate throughout the entire development of the game,” Mortaloni explains.

The XAG is tailored specifically to what Microsoft calls ‘gamer personas’. It’s these personas that outline different needs of the player, be that difficulty with hearing, vision, or the use of a prosthetic that isn’t catered for by mainstream controllers, to name only a few. As such, there’s never going to be a firm template for every gamer.

One way to drastically improve accessibility for all, then, is to hand the freedom to players to tweak the game to what they need and want.

“If there was only one thing that developers should take away from the Xbox Accessibility Guidelines to make their game more accessible it is to provide options,” Mortaloni says. “Having options allows players to customise their experience to meet their needs.”

Mortaloni points me to the Xbox Gaming and Disability Player Experience Guide, which is intended to offer developers an insight into game mechanics and decisions that could cause issue for players with disabilities. It differs from the XAG in that it attempts to outline the potential barriers facing disabled gamers, rather than how to fix or circumvent them.

The interesting part here is how the Player Experience Guide explains the process of eliminating barriers. An example it gives is a player with low vision and cognitive disabilities being unable to read the game text due to use of serif font.

It poses two solutions. One is the developer replaces the serif font with a sans serif font. The other is to implement a ‘facilitator’, which in this case provides players with the option to choose from multiple font types.

While the serif font eliminates one barrier, the option for users to choose from multiple font types potentially eliminates many more.