Hot News The best culture to choose in Humankind 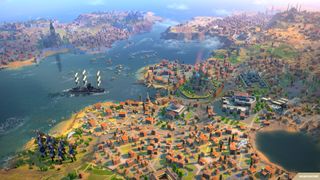 The Humankind culture system is what really sets it apart from most other 4x games, letting  you shed your heritage and opt for a newer, fancier model. You retain some choice parts from your previous culture in the form of legacy traits, units, and pre-existing buildings, but you get to add another layer to your civilization’s evolution.

Humankind is all about creating powerful synergies through ‘what if?’ scenarios, taking cultures from across space and time and mashing them together to form the ultimate civilization for your particular playstyle. With six eras and 60 cultures, that’s a lot of combinations. But one of the best things about Humankind is that there’s no right answer.

Some combos are more powerful than others, but when the choice is made based on the current challenges facing your civilization, that doesn’t always matter. Here’s an explanation of how Humankind’s cultures work, and some tips to help you choose the best one for you.

Culture reflects your preferred playstyle in Humankind. Every game takes place over seven eras, and for six of these you’ll have to choose a culture and earn Era Stars based around its affinity in order to advance to the next. There are seven affinities overall that define Humankind’s 60 cultures, and each comprises a specific playstyle and gameplay focus:

As well as an action, every affinity also has a passive affinity skill that contributes to the culture’s playstyle. These can be viewed by hovering over the affinity symbol on the culture card when choosing. Each culture also has three other defining features:

If you really like your current culture, you can also choose to take it to the next era. This means you will earn an ongoing 10% Fame bonus until you choose your next, but it’s usually not worth it. Humankind is all about synergising different cultures, so if you don’t add another to the pot, it can lead to stagnation, especially as you’re deciding not to stack legacy traits and emblematic quarter effects.

Humankind is about combining cultures to build the ultimate civilisation, and that means you can choose whichever you want. For example, you might stick with one affinity throughout, combining the Harappans, Celts, English, Haudenosaunee, Mexicans, and the Turks to create the ultimate Agrarian civilisation. You might also decide to switch part way through to a Militarist culture and use that excess population to create huge armies, or to drive industrial output with a Builder culture, instead.

Any combination of affinities is possible, but the key is choosing cultures that directly complement and lead on from each other. You want a culture that’s able to take advantage of what you already have in terms of resources, districts, and cities, but also help you overcome any problems you predict in the next era, such as other Empires invading. Adapt to deal with an ever-changing world.

In the Ancient Era, it’s the Harappans. While the Myceaneans and the Egyptians are good starters for either warfare and industry, those affinities also rely on population. Every civilization is built on food, and the Harappans legacy trait of +1 food on rivers and food-producing tiles, as well as their Canal Network emblematic quarter, really help grow your population.

Since their emblematic unit, Runners, are a better form of Scout, all your Tribe members will upgrade into them as soon as you enter the Ancient Era. This unit has really good movement, meaning you can quickly fan out to explore, establish outposts, sack sanctuaries, and claim curiosities.

When you arrive in the Classical Era, you’ll have a strong population infrastructure with which to do what you want, whether it’s pivoting to produce science, money, industry, or to start churning out units.