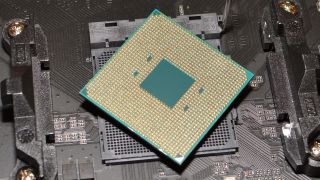 AMD has been very clear that its current AM4 socket will be retired when its Zen 4 chips are released next year. The new socket, generally believed to be called AM5, will switch to an LGA design, where the pins are in the motherboard socket and the CPU has contact pads as opposed to the current setup which has the pins on the CPU. This is what Intel has been doing for years, and apart from a few motherboard incidents back in the day, we’ve all learned to live with the change.

Leaks about the AM5 socket surfaced earlier this year, but specs and images from @TtLexington suggest that the new socket could be broadly compatible with existing coolers. New brackets may be needed, which is often the case with a change in a socket, but it doesn’t look too different from what we currently have.

Along with some shots of the socket and the mounting points, as well as the clearance needed (which is just under 8mm), there’s a specs table that covers the different processor TDPs that will need to be supported. There are six different classes of chip listed, starting down at 45W and ramping all the way up to 170W, which will require the use of a 280mm liquid cooler or higher.

To put that into some kind of context, the current top-dog on the consumer desktop lineup is the 16-core, 32-thread Ryzen 9 5950X, which has a TDP of 105W. Overclocking can push through this, but the fact that AMD is already looking at 170W suggests that Zen 4 may be looking to push harder than its predecessor. And in case you’re wondering, we’re not into Threadripper territory here, which has a default TDP of 280W.

These are just rumours at this point—Zen 4 isn’t expected for another year—so there’s plenty of time to change things around. But backwards compatibility with existing coolers and the potential for some monster chips could make for some interesting processor battles next year. Particularly as we’re expecting Intel to mix things up with Alder Lake before the year is out.

AMD’s Zen 4 architecture is expected to drop in 2022, with ‘Raphael’ being the first consumer processors offering up to 16-cores and 32-threads, but also packing integrated RDNA 2 graphics.