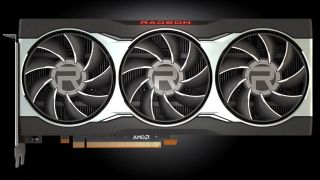 There is reason to believe AMD might support the updated DisplayPort 2.0 specification with its next-generation graphics cards based on RDNA 3. If that comes to pass, it could pave the way for uncompressed 8K gaming in HDR, though we’re getting a bit ahead of ourselves.

What’s at play here are half a dozen new patches to AMD’s open source unified graphics driver for Linux (AMDGPU). The latest patches (via Phoronix) come from AMD, and they add support for the DisplayPort 2.0 protocol.

The Video Electronics Standards Association (VESA) actually announced the DisplayPort 2.0 specification a little over two years ago, and then followed that up last year by adding an Alternate Mode (or Alt Mode) standard to the mix to provide “seamless interoperability with the new USB4 specifications published by the USB Implementers Forum (USB-IF).”

Alt Mode essentially enables all of the features of DisplayPort 2.0 through a USB Type-C connector, to split the bandwidth between video and data, if desired. And it is the bandwidth gain that is a big deal here.

Both the monitor and graphics card need to support DisplayPort 2.0 in order to tap into all this bandwidth. At present, neither exist in the consumer space. It looks like that could change next year, though.

Back in January, VESA told our friends at Tom’s Hardware that the pandemic delayed the timeline for getting DisplayPort 2.0 products into the wild.

“What’s kind of created a delay is the Covid-19 situation,” explained Craig Wiley, a representative for VESA. “What normally happens is that companies get together and test hardware among themselves to check out interoperability between a PC and a display. As a matter of fact, VESA has test events we call PlugTests, typically two or three a year. But we had none in 2020. This has caused a delay in debugging and developing.”

At the time, Wiley said he expects DisplayPort 2.0 products would arrive sometime in the second half of this year. If that is the case, it almost definitely means we are looking at DisplayPort 2.0 monitors arriving first, since we’re not aware of any major GPU launches scheduled for this year.

Looking ahead, AMD’s next-gen GPUs could support DisplayPort 2.0, and we wouldn’t be surprised if Nvidia embraced the standard next year as well. Of course, the other side of the equation is delivering enough GPU horsepower to drive ultra-high resolution gaming.

We’ve only recently gotten to the point where comfortably gaming at 4K is feasible, though it still requires high-end hardware and/or upsampling routines like Nvidia’s DLSS 2.0 and AMD’s FidelityFX Super Resolution (Intel will also implement some kind of supersampling technique with its upcoming Alchemist GPUs).

So while DisplayPort 2.0 will provide another path to 8K gaming, it remains to be seen if next year’s GPUs will actually be up to the task.