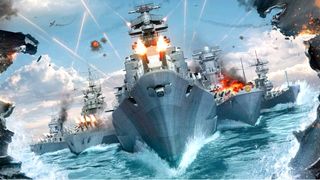 Several of World of Warship’s most prolific community members have walked away from the game following months of growing tension around intrusive monetisation.

The relationship between the game’s community and developer Wargaming has become increasingly strained over the last few months. The free-to-play game has always included paid-for content like premium ships and a premium time subscription, but there’s been an increasing reliance on loot boxes and gating content that players could traditionally grind for behind them (thanks, MassivelyOP).

The creeping randomisation has already become a point of contention, but things came to a head earlier this month when Wargaming announced a re-release for an old ship. The USS Missouri was originally available in 2016, with players able to grind for the ship without coughing up the cash. While it wasn’t considered a top-tier ship, it turned out its credit modifier was causing major issues in the game’s economy.

It prompted Wargaming to remove the ship in 2018, and it has only resurfaced a couple of times until now. The difference this time, however, is that you can only obtain the ship by purchasing loot boxes—despite earlier implications that you could just buy it outright.

It seems to have been the straw that broke the camels back, with a large amount of World of Warships’ high-profile community members from the Community Contributors Program announcing their departure. Incredibly popular ship reviewer LittleWhiteMouse was one of the first, writing in a forum post that a Wargaming employee had taken to Discord to “contradict me, belittle me and ignore evidence I was providing, all the while barking at me to show them respect.”

A further 23 community contributors have since departed, including YouTuber The Mighty Jingles, who called out Wargaming on their “increasingly aggressive monetisation and implementation of gambling mechanics into a game marketed to children.” Many creators also cited recent drama surrounding the Yukon, another premium ship, and Wargaming’s handling of the backlash as another reason they were leaving.

Wargaming didn’t initially respond to the mass exodus, but has since released a short post saying it was “awfully sorry” that the creators had left and that “they will be missed,” while also completely butchering LittleWhiteMouse’s name. The forum post also said the studio is looking into an alternative way to purchase the USS Missouri, hopefully negating the need to unlock it through random chance.