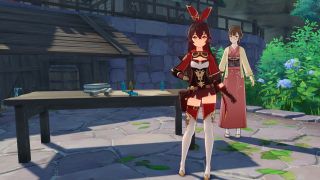 Want to know more about Theater Mechanicus in Genshin Impact? If the name seems familiar, that’s because this limited-time event first ran in version 1.3 back in February. Now it’s arrived in Inazuma, so if you missed out on this minigame the first time around, you’ve got just over a week to give it a try.

Theater Mechanicus is essentially a table-top game from Liyue, though you get to play inside the game as if it were a dungeon or domain. You can earn a unique event currency for completing each stage which you can then spend at the event shop. It’s not sticking around forever though, so if you’re keen to jump straight in, here’s what you need to know about Genshin Impact Theater Mechanicus.

You’ll need Adventure Rank 30 or above and have completed the ‘Ritou Escape Plan’ Archon quest, which you’ll get shortly after arriving in Inazuma. If you meet both of those requirements, you should find the ‘Theater Mechanicus’ world quest listed in your quest log.

The map marker will take you to the NPC Komakata—she’s located just to the northwest of Inazuma City. Speak with her to learn more about the minigame.

Theater Mechanicus is essentially a tower defence minigame. Enemies enter the room from one portal and exit through another, and it’s your job to do everything you can to stop them. If too many enemies escape, you’ll fail the stage.

At the start, you’ll be ported to the arena and given a certain amount of time to set up your defences—or Mechanici—to halt the invading enemies. Each type has a specific element or mechanic that you can use to your advantage. Here are the different types:

You’ll get to choose the party you go in with—and you can play co-op too—but it’s worth noting that you can’t actually damage enemies with normal skills—and you won’t be able to use your elemental abilities either. But you can use characters’ specific elements to set off elemental reactions with the different types of Mechanici you place down, so it’s important to think carefully about which characters you want to bring. Amber, for example, works well on the training stage as the default Anemo-powered Mechanici spreads the fire element from her charged bow shot to others, creating the Swirl reaction.

There are ten stages in total, and each has a different layout to consider. You’ll use Veneficus Points to place Mechanici, though you can earn more as you defeat enemies. Even so, you’re only allowed to place a set number for each stage, so positioning is essential. You can rotate Mechanici that have already been constructed by interacting with them or reclaim some of the points spent if you choose to deconstruct one to place it elsewhere.

As well as using Veneficus Points to construct Mechanici, you’ll also need it to draw ‘Wonderous Sticks’. These can provide buffs to Mechanici and players, while some will buff enemies for potentially greater rewards. Some stages have bridges that you can retract to take out tougher foes, while others might have enemies coming from multiple locations. The enemies vary, too, so pay attention.

You can gain some extra time if you crowd-control enemies by freezing them in place with a combination of Cryo and Hydro, and Anemo Mechanici work well to push enemies back. But you’ll still need to make sure you have the right combination of elemental reactions set up to finish them off.

You’re rewarded with experience points after completing each stage, contributing to your Mechanicus Mastery level. Each level increases the number of Veneficus Points you start a stage with, as well as the number of Wondrous Sticks you can use.

There are ten stages in total and you’ll be rewarded with Wondrous Talismans—the event currency—for each level you complete, which you’re then free to spend in the event shop. Like the minigame, the event shop is also only around for a limited time though, so be sure to exchange your currency before it disappears.

Here are the rewards: