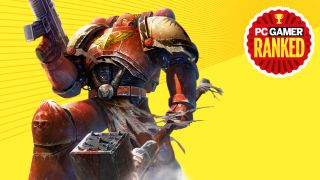 PC Gamer Ranked are our ridiculously comprehensive lists of the best, worst, and everything in-between from every corner of PC gaming.

The first edition of tabletop wargame Warhammer 40,000 in 1987 nailed the setting’s tone right away. It described humanity’s future in bleak terms, summing up what it’s like to be a citizen of the Imperium like this: “To be a man in such times is to be one amongst untold billions. It is to live in the cruellest and most bloody regime imaginable.”

The back cover blurb was no less pessimistic. “There is no time for Peace,” it declared. “No respite, No forgiveness. There is only WAR.”

Though frequently balanced by a tongue-in-cheek sense of the absurd, the various adaptations of Warhammer 40,000 that followed delighted in its grimness. In the board game Space Hulk, doomed space marines are beamed onto derelict craft in oversized power armor and then hunted by aliens through corridors they can barely turn around in. In the Eisenhorn novels, an Imperial Inquisitor, so scarred by torture he loses the ability to smile, makes compromise after compromise until he’s indistinguishable from those he hunts. In the miniatures game Necromunda, the underclass at the bottom of the hive city live on a diet of mould, rats, and food made from the recycled dead. You can practically hear the writers striving to outdo each other.

At their best, videogames have taken the same glee in depicting this baroque world, its cursed inhabitants, and their awful fates. At other times they seem more like the cyberpunk COOL FUTURE meme with power armor on. And there are a lot of them. They can’t all be winners.

Number of entries: 44. New and altered entries in the latest update are marked 💀.

What’s included: Every Warhammer 40,000 game on PC, including those in the Horus Heresy setting, which rewinds the clock 10,000 years to depict the downfall of the Imperium and how it got so messed up.

What’s not included: Games that were cancelled before full release like the MOBA Dark Nexus Arena, which was briefly available in Early Access. Standalone expansions like Dawn of War: Dark Crusade and Inquisitor—Prophecy are considered part of the original game, like regular expansions. Games in the Old World and Age of Sigmar settings are in a separate ranking of every Warhammer Fantasy game.

And now: Every Warhammer 40,000 game, ranked from worst to best.

Carnage was a sidescrolling autorunner, Canabalt with a thunder hammer and a heavy metal soundtrack. At some point the server was taken offline and now this game—this entirely singleplayer game, I should note—no longer runs whether you got the free-to-play mobile version or paid actual money for the now-delisted Steam version. This, obviously, sucks.

No relation to the tabletop game called Kill Team that lets you play 40K on a budget, this is a twin-stick shooter made with repackaged assets courtesy of Relic’s Dawn of War 2 and Space Marine. The co-op is local only, which is a shame, and checkpoints before boss introductions are always annoying, but what really sinks it is the camera consistently swinging into the worst positions. You’ll be staring at some pipes and a gantry while 15 orks shout the same recycled “Waaagh!” and murder you somewhere in the blackness taking up the rest of your screen.

Games Workshop released the first version of Talisman: The Magical Quest Game in 1983. It was a race-to-the-centre board game, half of which you spent finding a talisman to let you access the middle of the board, and the other half not letting someone else steal it from you. Even if the other players didn’t drag you down, the luck of the cards and dice would. It was fantasy Snakes & Ladders with PvP.