Hot News How to get started in Humankind 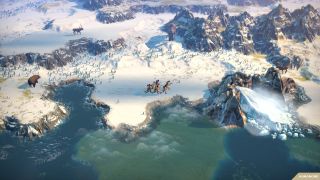 Looking for some Humankind tips to get you started? While Amplitude’s so-called Civilization killer bears a lot in common with the famous 4X series, there are a fair few differences to get used to when you sit down to your first game. There are Cultures, Era Stars, Civics, Tenets, Ideological Axes—even as an Endless Legend player I found myself a little lost at first.

No wonder, then, that Humankind features a whole stack of in-game video tutorials explaining how every mechanic works. But even then, some things do fall through the cracks. You’re likely to have to keep returning to the videos for answers, and honestly, nothing kills the magic more than having to watch video tutorials before you’ve even properly started playing the game.

That’s where this Humankind guide for beginners comes in. Here, I’ll walk you through the early stages, explaining the basic mechanics, and try to pre-empt the potholes that I fell into during my first few games.

Humankind’s AI avatars feature a variety of defining traits, but there’s no need to worry about these when you first start a game. Since you’ll be playing the character yourself, they won’t affect anything—all you need to do is decide your avatar’s personality, and how crazy they look.

If you want to send your AI character to fight your friends, then here’s what each defining trait does:

You can unlock more of each by earning in-game trophies. Currently, you can only make one avatar to play as, but you can view the archetypes, strengths, and biases of your AI opponents in the pre-match menu by clicking on the settings part of their portrait.

You start each game of Humankind as a wandering tribe in the Neolithic Era. You must earn an Era Star—Humankind’s advancement currency—to move onto the Ancient Era and choose your first culture. Here are the three ways to earn that star:

Humankind features a number of different match speeds, and these lower the requirements to earn each Era Star, but generally it’s easiest to get Tribe members at first no matter what the speed. You also get new Tribe members from some set narrative events during the Neolithic Era, and creating a load of units means that when you establish a city, you can disband some of them into it for an initial population boost.

But if you’re thinking, ‘hey, why don’t I take my ten Tribe members and destroy an opponent before they even leave the Neolithic Era?’, you can’t. If a player loses all their Tribe members, they won’t be eliminated like they are in Civ games—they can simply rebuild. It is, however, worth ransacking their outposts if you happen upon them, either to kick them off good territory or get a hefty food bonus.

The most important thing in the Neolithic Era is covering ground to find curiosities, sanctuaries, and potential settlement sites where you can plant outposts. This is where river tiles are useful: they cost extra movement to enter, but grant increased movement provided you travel along them.

While you can stick around in the Neolithic Era for as long as you want earning those two extra Era Stars, it’s better to pick your culture sooner rather than later. When another player chooses a culture it’s locked for everyone else, and this limits your options when you come to decide.

Every culture has one of seven Affinities, which governs its strengths and particular playstyle:

Related Post "Hot News How to get started in Humankind"