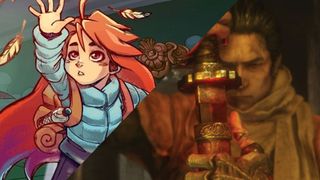 Difficulty is a topic that’s been hashed out time and time again. The discussion first arose from the sticky-floored corners of arcades, but it’s still very much a subject that sits at the core of our hobby. When talking about difficulty, naturally accessibility is going to come into the conversation, but adding an easy mode is not the golden ticket to solving a game’s inclusivity issues.

The discussion around accessibility has never been solely about the inclusion of easy modes. It’s vitally important to have conversations about how difficulty settings contribute to accessibility, but the conversation shouldn’t stop there. They’re certainly related, but advocates for accessibility have always said that games should go beyond just slapping on a ‘God mode’ setting, although including one certainly helps.

Out of all the possible options developers can include in their games, difficulty modes seem to ruffle feathers the most. When disabled gamers and accessibility advocates talk about ways a particular game can be more inclusive, there’s always a battle cry from certain communities. Their arguments tend to be specifically about difficulty settings, including how different modes might affect the player’s experience, remove the challenge, and take away from a game’s artistic vision and identity.

But the conversation surrounding accessibility has never been about taking anything away from a game—it means adding options. The focus should be on equal opportunity and fairness, and that’s what a lot of players and ardent defenders of difficult games misunderstand.

Steven Spohn of AbleGamers, an organisation focusing on making games more accessible for players with disabilities, made an excellent Twitter thread about this issue. “In any game, whether it’s Sekiro, Dark Souls, or any other skill-based game, there should be options to allow your health to be modified, your enemies health to be modified, and the game speed adjusted. This does not make the game easy. It allows people to make the game equal.”

“Nobody is advocating that we take your favorite game that is famous for being frustratingly difficult and make it so easy nobody cares,” Spohn continues. “The only request on the table is to allow people who cannot ‘git gud’ by learning, to have the options to make the game playable.”

“Equal” is the important word here, and Spohn even suggests using the term “Equal Mode” instead, to make it clearer that nobody is trying to stop games from being difficult.

When we acknowledge this, the challenge that developers face is how to create a game with a set of accessibility options that allow disabled gamers to have the same experience that other players have. That might include additional difficulty modes, but there is a long list of ways games can be made more accessible, from UIs you can resize to colourblind modes.

We need to ask broader questions about how games can be designed to reduce demands on the player—that’s where the conversation about accessibility should start. How can we make games more friendly for those with motor, visual, and hearing disabilities? How can we use clever game design so every player gets the same experience, regardless of what they toggle in the settings? The players asking for more accessibility want challenging games too, and creative solutions are required to find that balance.

A handful of games have adjusted their settings and still manage to offer the same experience for everyone. An article on the role of game difficulty by Ruth Cassidy (who has also written some fantastic words for our Accessibility Week) discusses how developers have successfully done this using Celeste, Control, and Pathologic 2. Control’s fast-paced and dynamic gameplay doesn’t go away after a few tweaks in the assist menu, and Pathologic 2’s fifteen different sliders have explanations on how and why they affect gameplay, letting you tailor the experience as you wish.

Celeste is a tough platformer, one of the toughest out there, but its assist mode comes with a number of adjustable difficulty settings, letting players switch up the rules and mechanics how they like. It was something celebrated by fans and, as Cassidy points out, even with the settings changed, the developer’s main vision is never spoiled.

Celeste remains a game that requires attention to the timing and momentum that’s at the heart of platforming. Celeste’s writer and designer, Maddy Thorson, even tweeted about their “Celeste-style assist mode” suggestions for FromSoft’s tough-as-nails action-adventure Sekiro.

The design philosophy behind Sekiro and FromSoft’s work isn’t even about creating difficult games. Ian Hamilton, an accessibility specialist and consultant who has worked with AAA and independent developers, explained on Twitter that FromSoftware’s goal of creating a series that requires a high skill set is far from what its creator wants.

“It’s an important distinction, it means that if someone enjoys the feeling of success through persistence but can’t succeed no matter how much they persist, that’s directly against the designers’ vision.”