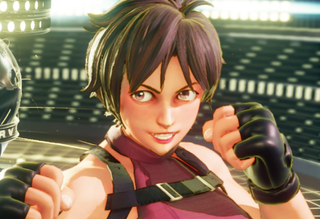 The latest update for Street Fighter V adds two new playable characters and has also, somewhat out of the blue, fixed an incredibly minor issue that fans have grumbled about for years. Sakura’s model on the character select screen, which gives a little preview of the fighter being chosen, has been compared by some to a fish, and a chameleon, while others choose to go with ‘bug-eyed’, alien, or simply weird.

Well, grimace no more, because Capcom has changed Sakura’s look and even changed her animations on this screen (thanks Eurogamer).

As one Street Fighter fan pointed out: “the randomness and specificity of this is peak Capcom energy.” The designers have, for want of a better term, given the character model a cuter expression, and the way she now looks into the camera reminds me of Cobra Kai for some reason… but hey, good to know the Street Fighter team’s focusing on the important things.

Here’s the old look and the new look side-by-side.

The change has, drum roll please, somewhat divided the fanbase! Some players now realise they never knew what they had, and lament the loss of old Sakura on the character select screen, while others celebrate the banishment of the googly-eyed brawler. On only one thing are Street Fighter V players ever united: Ken’s hair still looks like bananas.