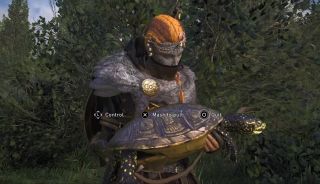 Looking for the European Pond Turtle in Valhalla? There are all sorts of creatures lurking in the waters of Francia, and you have three tricky critters to catch. There’s a shrine in Melunois you’ll come across called Sarclitas. Upon interacting with it, you’ll be asked to present three European Pond Turtles as tribute, but where exactly do you find them?

Fortunately for you, the pond is just to the north of the shrine, so you won’t have to go far. If you head to the pond and use Odin’s Sight, you’ll spot some very big Brown Trouts and little fishes, as well as the turtles you’re after. They swim at quite a speed, though, making them quite tricky to catch.

There are two ways to catch the turtle. You can use your fishing line, which you’ll get by building the fishing hut in Ravensthorpe. You can check out our Assassin’s Creed Valhalla settlement guide here if you’re just getting started. Once you reach the pond, simply use Odin’s Sight to spot the turtles then cast your line to catch them. Alternatively, you can use your bow or spear to kill them.

Once you’ve captured three turtles, return to the shrine. You’ll get one skill point for your troubles and it’s one less mystery to contend with. The majority of shrines seem to be focused on fishing in The Siege of Paris, so keep this pond in mind for future mysteries.

You can check out our guide on how to start The Siege of Paris DLC here, as well as how to complete Rebel Missions and where to find Reaper gear.