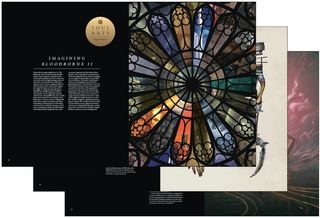 If this year’s reveal of Elden Ring showed one thing, it’s that the appetite for Fromsoft’s more Soulsy games remains as ravenous as ever. Yes the rest of the industry has picked the bones out of those games, and there’s no shortage of B-tier challengers, but nothing has come close: to the extent that, when Elden Ring basically turned up looking like Dark Souls 4, most everyone just thought ‘great!’

Youtuber Vaatividya has made a career out of a soothing Australian accent and piecing together community lore in well-produced videos—he’s been around for yonks, and tends to be the go-to recommendation for anyone just getting into the series and its lore. Vaati some time ago began running fan art competitions that are always hugely popular, something that caught the eye of Dublin-based publisher Tune & Fairweather, ran by former Edge man Jason Killingsworth. Tune & Fairweather’s signature project is a lavishly produced edition of the Dark Souls tome You Died, by Killingsworth and Keza Macdonald, so you can probably guess what happened next.

Soul Arts: Presented by Vaatividya is a hardback coffee table book that collects and reproduces the pick of the Soulsborne community’s fan art alongside commentary from the Youtuber. The five art competitions the work is drawn from were all themed, so the book contains these sections: New Sekiro Prosthetics; Unseen lands of Dark Souls; Elden Ring Boss Challenge; Demon’s Souls Sixth Archstone; and finally Imagining Bloodborne 2.

The project only launched a few days ago but is already wildly successful, sailing past the half million mark with 27 days to go. The hunger for something, anything new relating to these games is real. So there’s still plenty of time to hop on, though given the production values of this thing a physical copy will set you back £52/$72 plus shipping. There’s no mention on the Kickstarter page of whether the artists who actually created this work are being paid for it, though you can pay extra if you want one signed by Vaati.