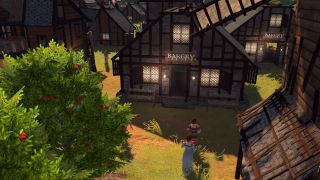 Last week I wrote about Patron, a new survival city builder where the only resource I reliably generated in my first few games was piles of dead, frozen peasants. But I figured out how to survive the harsh winters with good planning and upgrades to my starter buildings, which means I can now focus on producing something more useful.

That something is cookies. Lots of cookies. Cherry-flavored cookies, to be specific. Not that my peasants will know what they taste like, because not only am I planning to bake thousands of cherry cookies, I won’t be letting anyone in my village eat them.

This will all make sense shortly. Since winter is no longer resulting in the mass extermination of my citizens, I’m facing my next challenge: proper expansion. Populations in Patron grow very slowly, even with a pro-immigration policy in place, so even if I research and build new production buildings it’s hard finding workers to assign to them. I simply don’t have enough people in my village to staff all those new jobs unless I pull them off other jobs, and pulling people off wood-cutting and coal-mining duty means winding up with a bunch of dead, frozen peasants when winter arrives. Been there, done that.

Researching and building stuff also costs gold coins, and I’m pretty cash-poor at the moment. After building a dock and upgrading it, trade ships visit a few times a year so I can sell my excess goods to the world outside my village. But I’m not happy with the profits. Most goods I’m producing—things like iron, lumber, apples, venison, and wheat—sell for 1 gold per unit. A couple others, like eggs, leather, and oats, sell for 2 gold per unit. And there’s a 10% tax on everything I sell.

But while I’m scrolling through the list of possible goods to buy or sell, I notice the most expensive goods on the list are cookies. One unit of cookies sells for a whopping 7 gold.

I find the drop-down menu in my bakery that lets me change production from bread to cookies, but I realize it’s gonna be way, way more complicated than that. Cookies require flour, made from wheat in a windmill, which I already have working so I can make bread. They also require eggs, already being produced by my small chicken farm. The secret ingredient, however, is cherries. I have no cherries because I have no cherry trees. I don’t even have cherry seeds, because I haven’t researched them yet.

But that 7 gold per batch of cookies is so tantalizing. If I could roll out lots of cookies I’d be trading at a huge profit. And the trader ship can carry 300 units. Very suddenly I’ve invented my own quest, not just to bake and sell cookies but to fill an entire ship from aft to stern with 300 units of cookies. The trade ship will creak under the weight of my mighty baking! I will build a cookie empire. This I swear on the bodies of my dead, frozen peasants.

It might not be that easy, especially since I need to keep baking bread to feed my villagers in the meantime, which means I need to set up a whole secondary operation to funnel resources into cookie-making. More eggs, more wheat, more flour, all of which will take more labor to produce them. And naturally, wheat and cherries don’t grow in the winter. I realize Operation Fill A Ship With Cookies is probably going to take years.

I get started by researching seeds and eventually plant two orchards of cherry trees. I also plant a patch of plum trees, having seen that brandy sells for 4 gold per unit. I have a distillery currently making beer, but when the plums grow I’ll convert that to a brandy factory. It’s a side-hustle solely to fund my cookie industry.

With new orchards I need new workers, so I pull some peasants off mining, woodcutting, transporting, and other important duties that seem less important now that I’ve got an image in my head of a ship filled with nothing but cookies. With my new farming brigade ready, I have to wait for them to prepare and plant the fields. Winter hits and I have to sit through that. Then I have to wait for the trees to grow. Eventually, I see blossoms on the branches. And finally, finally, my first cherry trees can be harvested.

Patron is good at letting you see how it all works. If you zoom all the way in (there’s a photo mode that lets you get really close) you can watch your little farmer go out into the orchard and harvest the cherries, after which little crates filled with cherries will appear next to the farm. A carrier will come along and bring the crate to the nearest depot. And then another worker will take them from the depot and bring them to the bakery.

You can really watch all your resources and goods get carted around town, unless you made all your spare citizens into cherry farmers, in which case no one comes along to pick up the cherries. Damn.

I eventually get a few more citizens in my town, build them homes, and assign them to carry cherries (and other things, but mainly cherries). But even though I’m watching my little workers like a hawk, there’s a problem. As winter descends again and my fields go white with snow, I see that my bakers have only produced 20 damn cookies. That’s it for the year? 20?

I eventually suss out the problem: Very few cherries are actually making it from the depot to the bakery and into the cookies. And that’s weird because I built a depot right next to the cherry fields and the bakery is right across the street from the depot. It’s a distance of about 30 feet, but most of my cherries aren’t making the journey.