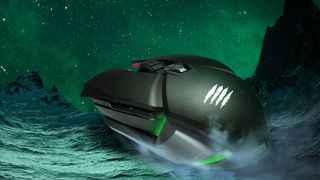 Not too many gaming mouse models have drawn inspiration from Bruce Wayne’s tricked out Batmobile. And by ‘not many’ I really mean just one, that I am aware of—that would be the B.A.T. 6+ from Mad Catz, an ambidextrous rodent with some interesting features, and bizarre marketing.

“B.A.T. 6+’s design cues were inspired by spaceships, hypercars, and batmobiles. The side vents design was obtained from the speediest hypercar. This design prevents the gamer’s hands from overheating during long hours of play,” Mad Catz explains.

Don’t you hate it when your hands overheat and shut down while gaming? I’ve never experienced that myself, but I imagine it would be quite frustrating to have happen. Thank Zeus there’s now a mouse that will prevent such a thing.

The vents are not the only part of this mouse to draw inspiration from spaceships and batmobiles.

“The changeable side skirts reflect the aggressiveness of the starfighter’s wings, making the control more agile. The palm-rest is also similar to the batmobile’s roof. Every line is carefully thought through, giving the whole mouse a raging sense of aesthetics and power,” Mad Catz says.

I’ll admit, I’ve never considered whether a peripheral offers up a “raging sense of aesthetics and power,” but now I’ll never not consider that criteria. Mouse and keyboard makers take note.

Silly marketing aside, the B.A.T. 6+ does actually look promising. It also flew under my radar when it was first unveiled at CES earlier this year, only coming to my attention now courtesy of TechPowerUp (there’s also a more recent YouTube video Mad Catz put out that highlight the mouse’s features).

What this boils down to is a customizable gaming mouse with an adjustable palm rest, swappable backplates and side skirts to accommodate different grip styles and hand sizes, RGB lighting, and a fast sensor.

It also boasts 10 programmable buttons, with the main clickers sitting atop Dakota switches rated for 60 million presses. You can configure up to five profiles and save them to the mouse’s onboard memory, to prevent having to customize your settings when going from one PC to the next.

The B.A.T. 6+ was supposed to be shipping by now, but I’ve not found any retailers actually selling it. That’s a shame, because the market could use more capable gaming mice that are suitable for both left-handed and right-handed gamers. To that end, I’ve reached out to Mad Catz for information on pricing and availability, and will update this article when I hear back.