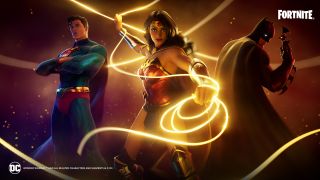 We officially have 5/7ths of a full Justice League in Fortnite. DC Comics’ Wonder Woman is coming soon in Fortnite as a new skin, plus a big bundle of cosmetic items to boot. The Amazon warrior goddess now joins Superman, Batman, the Flash, and Aquaman. All we need now is Cyborg and Green Lantern for some truly ridiculous 50 vs 50 matches.

Much like previous crossovers, there’s also a chance to earn the Wonder Woman Fortnite skin early. We’ve laid out all the details you need to know below, including when Wonder Woman comes to Fortnite, what her cosmetic items are, and how to get her early in the Wonder Woman cup.

Expect Wonder Woman to hit the Fortnite item shop on August 19 at 8 PM ET. That’s 5 PM PT if you’re wondering, and 1 AM BST the next day for UK folks.

Much like previous major crossovers, Epic is holding a short tournament to allow top players to earn the Wonder Woman Fortnite skin early.

On August 18, duo teams will be able to play a maximum of 10 matches (within three hours) to earn as many points as possible. The top teams in every region will receive the Wonder Woman skin along with the “Diana’s Mantle” cape as a back bling item.

Even if you whiff the competition, any teams that score at least eight points will get the “Honorary Amazons” loading screen art, which features a bunch of Fortnite characters charging alongside Wonder Woman.

You can check out Epic’s official rules for the tournament here.

First off, we have the obvious: The Wonder Woman skin comes in two variations. One with full pant legs and another version that’s more like the classic skirt shorts Diana wears throughout most of the movies. Her vambraces (the armor on her lower arms) also change from silver to gold depending on what variant you’re wearing.

Don’t forget to check out how to get Superman in Fortnite before the end of season 7. You can also grab the latest Marvel character to cross over: Guardians of the Galaxy’s Gamora. As if that weren’t enough, Ryan Reynolds’ video game comedy got its own Fortnite skin, dubbed “Dude.“

You can follow our Fortnite hub for more challenge guides and news on the latest skins.