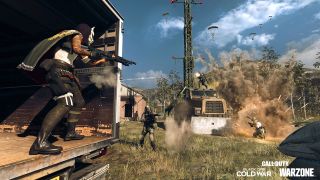 The TEC-9 has been added to Warzone, and with it comes a really interesting variety of loadout options. It reminds me of the FiNN LMG with its fancy fire rate-altering attachments, or the M4A1 and the unique semi-automatic ammunition attachments. The TEC-9 takes this a step further by using the muzzle attachment slot to get these alternative fire methods sorted.

Unlocked at Rank 31 of the Season 5 Battle Pass, the TEC-9 is a semi-automatic SMG by default. However, with the right attachments you can beef it up to a 3-round burst or even fully automatic. But which of those options works best?

Something weird about the TEC-9 is that the gun’s damage values actually change when you use the different muzzle types. We all knew the fire rates would be different, but not this too! According to JGod, the fully automatic version of the TEC-9 does the least damage of the three, but that doesn’t necessarily mean it’s the worst of the bunch. In fact, the super fast fire rate of this TEC-9 build makes it the best in many ways.

Your time-to-kill when fully automatic is the fastest the TEC-9 can be at all ranges, so this one is decked out to absolutely shred close-up. It’s a classic SMG in that sense.

There’s also the position concealment that the Full Auto Repeater adds. The TEC-9 doesn’t actually have any silencer options, and works more like the Eliminator attachments. Position concealment means you’re visible on enemies’ minimaps while shooting, but when you stop firing you vanish. It’s a lot harder to keep track of compared to playing with no suppression at all, and only the most vigilant players will be able to punish the use of a position concealment attachment.

For the barrel, I’m using the 4.9″ Task Force. It’s bad for recoil control, but fantastic for everything else, especially strafe speed. Speeding up your movement with the TEC-9 will make close-range engagements a whole lot easier to manage, and you should be able to take enemies while dodging their bullets a lot of the time. It even compensates for the recoil control by boosting your damage range and bullet velocity, handy when aiming at baddies from a distance.

The strafe speed added is even further helped by your Raider Stock, which boosts your ADS firing movement speed for maximum cha-cha sliding while shooting. Along with the Tiger Team Spotlight boosting your mobility even further, you’ll have a seriously fast-paced SMG on your hands with this fully-automatic TEC-9.

This gun’s main strength is also its main downfall. Your fire rate is absolutely rapid, but with such a fast fire rate comes a lot of instances where you’re reloading when you’d rather be shooting. It’s mitigated a little bit by the STANAG 48 Rnd magazine, but it can still be frustrating, just like it does with the MAC-10.

I enjoy pairing an SMG like this with a nice little ranged assault rifle. The Krig 6 fits the bill nicely, but you could always pair the two new guns up and go for the EM2 as well.

I’m also using both of the new Season 5 perks with this loadout! Obviously, you’ll need Overkill first to get hold of the loadout initially, but if you can grab another one, you’ll have access to both Tempered and Combat Scout.

It’s still early days, so these may change and turn out to be terrible in the meta. But you’re already running a not-fully-silenced SMG, so why not ditch Ghost too? Tempered massively cuts down your re-plating time, so you can duck into cover and get spraying after armouring up far more quickly than your enemies. With Combat Scout, hitting an enemy briefly pings them for your teammates, which helps massively with calling out their locations. It also highlights them through walls for you for a little bit, making it a brilliant pick when you’re trying to chase them down and finish them off as they retreat.