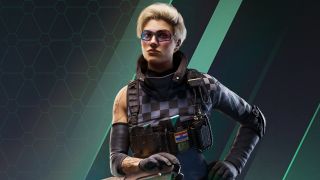 Rainbow Six Siege has a new engineering genius on the block, and her name is Anja “Osa” Janković. The new Croatian attacker coming in the Crystal Guard update brings a gadget to her team that the defenders would probably love to steal: redeployable, transparent, waist-high bulletproof walls that can attach to windows, doorways, or anywhere on the ground. She’s also the architect behind all of Nighthaven’s gadgets and the first trans character to join the roster in the game’s six-year run.

I feel like a broken record every time I say a new op “could be my new main,” but I think that’ll actually be the case when Osa releases. Based on my short time playing her during a preview event, I’m fascinated by her ability to brazenly approach a bomb site holding a Talon bulletproof window and make any angle her own. In an instant, she can flip the power balance of a choke point and turn a fatal funnel into a defensible stronghold.

And it’s relatively safe to do so. Unlike a standard deployable shield, the Talon completely protects Osa from the front while she’s deploying it. Without much risk, she’s free to repel up to a window, install a Talon, and start calling out what’s on the other side. Osa carries two Talons and can reposition them freely. When attackers need to quickly drop the window, a red canister on the back of the device (same as Mira’s one-way windows) can be shot to make it fall apart. Alternatively, she can walk around while holding a Talon as a shield to peek corners and give callouts like a mini Clash. It’s an exceptionally flexible gadget, but has a few weaknesses that will theoretically keep it from being too powerful.

For instance, a C4 or impact grenade will destroy the Talon just like a normal deployable shield. Those are two of the most common secondary gadgets on defense, so there will almost always be somebody able to deal with Osa.

Like Mira’s windows, players can also crack the clear glass by meleeing the gadget, blocking sight from either side without destroying it outright. Though, this could also be used to the attacker’s advantage—Ubi game designer Emilien Lomet told me a playtester once cleverly deployed a Talon to a window on their flank and intentionally cracked the glass to create a bulletproof window blocker. You get two of them, so why not?

As far as carrying around a Talon for protection, this has some clear limits. Osa needs to crouch to cover her legs and the Talon won’t protect her sides like Clash or Montagne’s dedicated tower shields. If she’s standing shield-first against two enemies, one of them can probably shoot her exposed left or right. But if you’re facing a single target straight on, you get awkward showdowns like this:

Notice how long it took to put away the Talon? That’s an intentional penalty meant to prevent Osa from quick-swapping in front of enemies for a surprise kill (an annoying tactic that still gets Clash occasionally banned in Ranked games). It’s a much better idea to simply plant the shield where you stand and use it as cover anyways.

Another point in Osa’s favor is a choice between two guns that I’ve always liked using on other operators—Thermite’s 556xi assault rifle and Jackal’s often-ignored PDW SMG. The pairing is a bit random, but I enjoy how different they are.

The 556xi is a strong, very easy to control rifle balanced by its slow fire rate. The PDW is the opposite with an extremely high fire rate, steep damage dropoff, and harsh recoil at long range. You won’t want to cover long angles with it, but its exceptionally large drum magazine makes it a miracle in tight hallway brawls. In years past, an operator’s loadout tended to have guns that overlapped each other to the point that the one that’s slightly better is the one that everyone uses. That has always been the case with Jackal’s PDW (overshadowed by the C7E), so it’s cool to have a new reason to take it for a spin. With Osa, I can foresee specific maps and objectives where I’d rather have an SMG than a slow-firing rifle, like Coastline’s Hookah Lounge.

Osa is the latest Siege operator belonging to Nighthaven, a PMC founded by sniping attacker Kali. The group also consists of several operators added to Siege since late 2019, including Wamai, Ace, Aruni, and now Osa. Ubi has been vague about the purpose of Nighthaven in Siege’s ongoing story.

Rainbow and Nighthaven are technically all on the same team, but the two factions have been antagonistic in cinematic trailers. At first I thought they were meant to be the Cobra to Rainbow’s G.I. Joe, but art director Alexander Karpazis tells me it’s more complicated, and we should expect to hear more about Nighthaven in Season 4.

“It’s not this evil organization,” he said. “It does have a lot of gray areas. They are a PMC, they do move really fast and that creates conflict with the Rainbow team. But they’re doing it for the right reasons and they’re getting people who have just motivations.”

I’m not so sure there’s a legitimate way to make a conflict-for-profit PMC look like the good guys, but that sort of dissonance is basically Siege in a bottle—its romanticized coalition of counter-terrorism operators and soldiers plucked from actual military organizations has never reflected the real world.

Osa is an engineering genius from Croatia with more interest in building cool stuff for her teammates than shooting guns. Her bio describes her as a raw creative talent whose specialty in robotics drew the attention of Kali’s Nighthaven. A single sentence of the bio also mentions that Osa is a trans woman.

“We haven’t kept it a secret, the Rainbow team is diverse. And we quite frankly love that inclusivity, that representation where anybody can come into the game and find somebody that they can relate to, want to play, and can see as a role model,” Karpazis said. “Osa is just that, another operator that comes from a diverse background.”