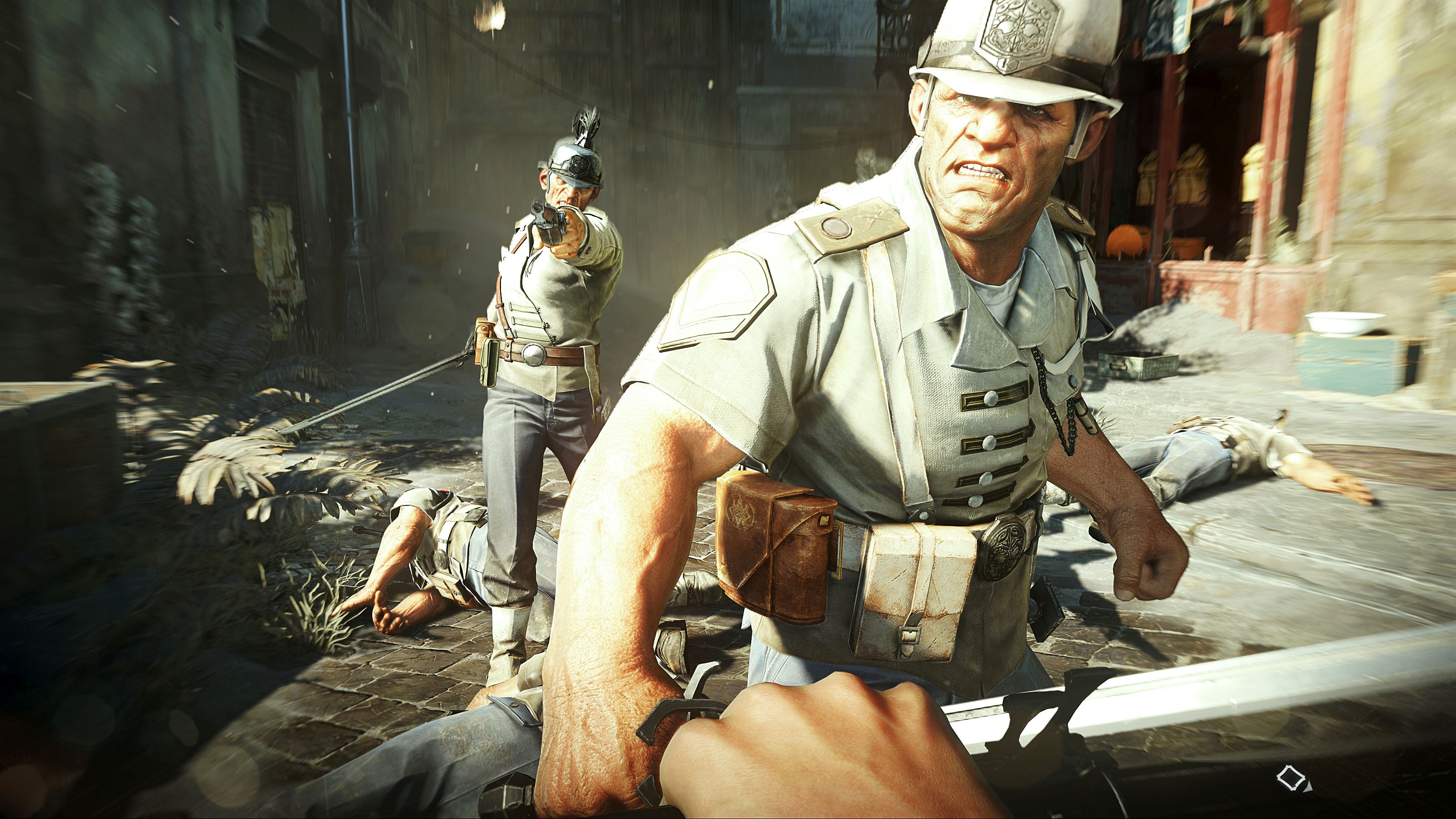 You there, in the shadows—you can come out now. I know why you’re hiding, clutching a stun prod the way Indiana Jones clings to a torch. You’re nostalgic for Thief, or conditioned by the disapproval of Deus Ex characters who advocated for non-lethality. You’ve been shamed by every post-level screen in Dishonored, implying you messed up by killing your enemies.

But it’s OK. I free you from your obligation to skirt around the edge of the pool, instead of bombing in and making enormous, satisfying ripples in these reactive worlds. You owe it to yourself to embrace the chaotic, surprising action that immersive sims are built to support. And with Arkane finally embracing all-out shooter mechanics in Deathloop, your time is now.

Besides: you’re going to do your back in, hunching like that.

Don’t get me wrong, stealth has done wonders for the immersive sim. The development of Thief pushed Looking Glass away from space stations and dungeons, and towards the kind of lived-in domestic spaces the genre is now known for. Without those mansions, teeming with tiny, gleaming objects for Garrett to plunder, there’d be no Prague in Deus Ex: Mankind Divided, and no Greenbrier Manor in Gone Home. A whole discipline of level design, that goes deep rather than wide, would likely not exist.

Moreover, an early focus on stealth forced developers to get to grips with complex AI behaviour. A stealth game can’t begin until an enemy has an ‘idle’ state; it can’t produce tension until that enemy can search without ‘seeing’ you. Once that’s sorted, you’re halfway to the sort of half-hostile, half-safe environments that games like Dishonored and Fallout thrive on—worlds in which friendly NPCs might turn on you if your own behaviour is sufficiently alarming.

Those rudimentary guard responses laid the groundwork for games which hold up a mirror to the player—showing, in ugly close-up, the image a person wandering the land with a finger resting none-too-carefully on the ‘murder’ key. Immersive sims have trudged further into that moral morass ever since, reflecting back your dodgiest actions with dark endings and disapproving dialogue.

Deus Ex gives you an older brother—oh boy, an older brother! Wonder what albums he’ll let me borrow!—only to have him tell you off when you kill too many terrorists. Dishonored 2, meanwhile, hands you the sentient heart of your own mother—or partner, depending on who you’re playing—and has her make clear she’s not angry, just disappointed.

Many of us love immersive sims specifically for their sense of accountability. But at its worst, that sense can stop you from engaging with another tenet of the genre: freedom of approach and creative expression.

When killing is discouraged, stealth becomes the default. That’s borne out in the Steam stats for Dishonored 2: roughly 56% of players who completed the game did so in low chaos, avoiding killing wherever possible. And to do that, they made a conscious choice to circumvent combat.

Here’s the thing: Dishonored’s combat is some of the best in the business. Leaning on the action chops it honed during Dark Messiah, Arkane developed a fantastic, high stakes swordplay system that pushes you to create gaps in your enemy’s defence—staggering them with a block, or a blast from the pistol in your offhand. The moment you get an opening, you can lean in for an instakill—delivered in gory, gratifying slo-mo that recalls the work of Kojima Productions.

On top of that, Arkane layers its powers, most of which have dual stealth and combat functions. The Far Reach that lets you stride onto ledges 200 feet away? Works just as well when flipping enemies into the air, ready to land on an exposed blade. Bend Time and Possession? Can be used to walk enemies in front of their own, mid-flight bullets. Even the most mundane parts of your moveset can turn the fight; the same lean that allows you to peek around corners is better exploited to dodge bullets, Matrix-style.

If you’re looking for inspiration, search ‘Dishonored skill video’ on YouTube and watch in awe. Masters like the ironically named StealthGamerBR make the case for Dishonored as the greatest improvisational shooter of all time—combining high-speed parkour with an ultra-precise throwing arm that turns household objects into heavy ordnance. Thanks to a set of upgrades that can punctuate your battles with bullet time, this kind of high level play isn’t necessarily beyond the reach of the average player, either—not after a couple of rehearsal runs, at least.

What’s most satisfying about StealthGamerBR’s videos is that they’re not some perversion of the immersive sim format. If anything, they’re a noisy celebration of the tactile environments being built by the developers working in Thief’s lineage. During the slaughter embedded above, the YouTuber makes a repeating comic riff of one poor guard’s severed head—dropping it first onto a table laid for dinner, then later in the soup still boiling in the kitchens. It’s a work of sick, artful comedy that makes full use of the highly interactive levels Arkane specialise in.

Even outside that particular series, you’ll find that immersive sims become joyfully daft vehicles for—yes—high chaos, just as soon as you bin off the dream of that perfect ghost playthrough. In my recent run through the early Deus Ex games, I’ve skipped leg day to invest in super-strength arms, in order to weaponise the many physics-enabled chairs, barrels and trash cans that litter Earth in the 2050s. I’ve upgraded my Invisible War machine gun to set off the spiderbombs on the belts of my enemies, freeing tiny metal arachnids into the world to fight on my side.

One of my proudest gaming memories is now of murdering Maggie Chow, the global conspirator and gang war instigator, by hurling a couch from the mezzanine of her penthouse flat. Last weekend, I smashed the glass roof of a Karnaca train station to drop straight onto the neck of a guard way below, like Mario bouncing off a Goomba. I’m happy. I hope the same for you, too.