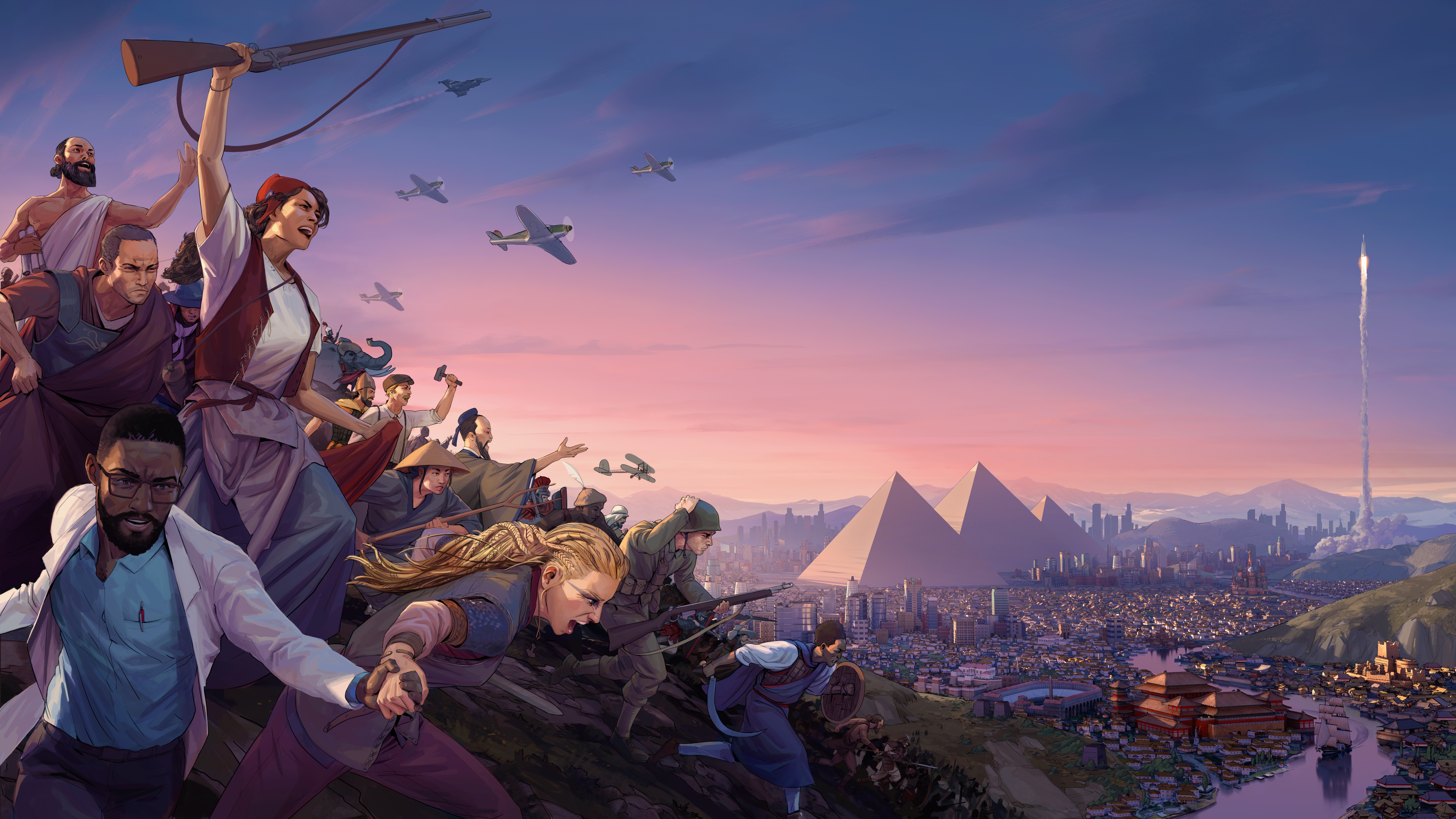 There’s something weirdly mythical about the historical 4X and the dominance of a single series, Civilization, for 30 years. But Amplitude Studios has spent a decade preparing to rewrite that myth. Humankind is the result: a massive, history-spanning behemoth that’s kept me on its hooks until sunrise a few times. But in trying to make its own Civilization, Amplitude may have sacrificed too much of what made its earlier games, Endless Legend in particular, such compelling weirdos.

This is not to say that Humankind doesn’t have any bold ideas. It’s clear that isn’t the case as soon as  you hop into a campaign. Normally you’d need to pick a civ, faction or race of nerdy dragons first, and then plonk down a city, but not here. Before picking a site for your first settlement, or even picking a culture, you must first explore the world as a nomadic, Neolithic tribe. During this phase you saunter around gathering food and other resources from nodes scattered all over the world, with breaks where you get to fight animals. Picking berries and beating up mammoths—a perfect Neolithic family day out.

I’m sure this all sounds quite relaxing—that’s a trap. It’s really a sprint, a particularly brutal one on the highest difficulty, where you’re competing to get first dibs on the list of playable cultures and stake your claim on the most bountiful regions. Found a place with bronze and horses? Get an outpost on that as quickly as you can, and then get back to brawling with the wildlife.

Your little band of explorers will also grow, allowing you to break up the squad and send individual units or smaller groups far and wide. Of course, that puts them in danger, as other tribes might try to pick them off. Territory you’ve claimed in preparation for your transformation into a settled civilisation can also be ransacked and taken from you, so things can get a bit heated. It’s good to make enemies early on and know where you stand.

It’s simply the best 4X starting experience. By the time my Neolithic adventures earn me enough stars to move to the next era, I’ve usually pushed back the fog of war considerably, found several potential sites for my first city, and know where I can find dyes and other early-game resources. It’s especially helpful when it’s your first game, easing you into something that quickly balloons in complexity.

A bit like Civilization 6: Rise and Fall’s Great Ages, Humankind only lets you move into a new era when you’ve hit enough milestones. Get seven stars for seven milestones and you’ll be able to leap into the next era. Having these objectives is a fantastic motivator, and it’s a good way to measure your progress against the competition. Unfortunately, the milestones are hardly inspiring. They’re all arbitrary targets like ‘research 60 techs’ and ‘defeat 20 military units’, and the only thing that changes is the number. You’ll be at turn 200 basically doing the same thing you were doing at turn 20. I think MMOs have broken me, though, because I do find the grind slightly reassuring.

While those stars are crucial, what you’re really trying to get is the accompanying Fame payout—if you have the most when the game ends, victory is yours. So you might linger in an era you’re free to leave, just so you can mop up a few more stars that you’re close to getting. Watch out, though, because that Fame isn’t going to save you if a more advanced empire decides to pick a fight. More Fame can be earned by erecting wonders, too, or by completing competitive deeds, like discovering natural wonders or landing on a new continent.

When it’s time to hit the ancient era, it’s only then that you get to pick your first culture. Each has a penchant for science, expansion, warfare and other specialities, giving you an active and passive ability shared by all the cultures with that affinity. You also get a unique building, unit and bonus, like Egypt’s ability to generate more industrial power. The bonuses are usually big, game-changing numbers, and there’s a significant difference if you pick, say, the industrious Egyptians over the expansionist Assyrians. These differences will determine, or at least inspire, your strategy, but mechanically they are a lot less distinct than any of the factions Amplitude has created previously. No numerical bonuses can really compare to the unique traits of Endless Legend’s Necrophage, a ravenous insectoid swarm that can’t make friends and just wants to eat everything, or Endless Space 2’s Horatio, a faction filled with clones of the most narcissistic person in the galaxy.

Humankind’s big trick is that you’re not stuck with your chosen culture. At the start of every new era—there are six in total—you can optionally adopt a new era-appropriate culture while keeping the bonuses from your previous ones. Individually, the faction design seems conservative, but when you start mixing them up things start to get a lot more exciting. There are a million possible combinations, encouraging a lot of number crunching, theorycrafting and experimentation. You’ve also got lots of religious tenets, available to pick whenever your religion ranks up, and culture-wide civics decisions, both of which pile on even more bonuses. Overpowered builds are inevitable with this many combos, and I much prefer it to perfect balance.

Watching my favourite numbers skyrocket brought me a lot of joy, but I can’t say I got attached to any of my hybrid cultures. There’s nothing to really get attached to—only the odd unique building or unit. And the individual cultures never stick around for very long, leaving behind only a bonus and the occasional relic—a pyramid here, an amphitheatre there—as their legacy. The AI leaders have personality traits, but I would never have been able to tell if the game didn’t explicitly show me in the diplomacy screen. And it’s much harder to nurture grudges when the civilisations keep changing.

Amplitude is so experienced in the art of weaving narrative twists into strategy games that its absence is Humankind’s greatest surprise. I wouldn’t expect something like Endless Legend’s more scripted stories in a historical 4X, but Humankind doesn’t really generate much emergent stuff either. There’s this whole theme of multiculturalism that lies at the centre of Humankind that largely goes unexplored, beyond the obvious mechanical benefits. Even compared to Civilization, which has been known to let its hair down with things like rock band missionaries, it’s utilitarian. You’ll occasionally encounter some random events, but they’re a half-hearted bunch and disconnected from the rest of the game.

It’s telling that instead of your population’s happiness or contentment being reflected, cities instead have a cold, mechanical stability metre. This, however, I’m OK with. I’m done with trying to keep people happy. All I want to do is build absolutely humongous cities, and Humankind is more than happy to be of service. These things consume everything and spread all over continents like a living factory, gobbling up all the resources and turning them into cash and guns. Feeding time is all the time.

By linking a region you’ve already claimed to an existing city, that city can then start expanding into the new region and harvesting its resources. Cities can even swallow up other cities, giving birth to a mega-city instantly. These big moves are pricey and destabilising, but with the economy’s tendency to snowball, you can rack up a huge surplus pretty easily, and stability issues can be fixed by plonking down the appropriate district. There just isn’t much—aside from your opponents—halting your expansion. When obstacles do appear, the solution is rarely to rein it in; you can always keep going.

I like the constant, consistent progression, and nobody likes being told they can’t assimilate an empire today, but with more stringent limitations there’d also be more friction, more tension, and a more interesting strategy game. Thankfully, you can get to that game if you fiddle around with the settings a bit. See, the default settings will give you a game where nobody declares war, where you’ll outpace everyone by multiple eras, and where you’ll spend at least 100 turns just waiting around for something to happen. It put me right off. Just bumping it up a few notches to Empire difficulty (there are two more beyond that) makes a world of difference, especially if you shrink the map down to make the fight over territory a lot nastier.

When I turned the difficulty up the first time, the Neolithic tribes were going at it even before they’d invented the concept of war, and by the second era everyone was getting stuck into some much more serious scuffles. The need for troops massively slowed down the development of my cities and my economy, and while cheesy builds can still throw it all into (welcome) disarray, the AI can at least give you a proper fight when you let it off the leash. I’m actually losing a war terribly in my current campaign. It’s great!