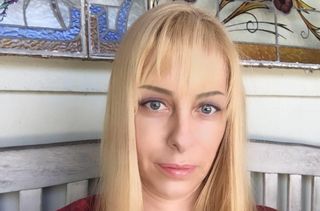 A man has been arrested by Brazilian police on suspicion of the murder of Christiane Louise, a Brazilian voice actor whose career included such roles as Mercy in Overwatch and Cortana in Halo. Christiane Louise was 49 years old, and her death was announced on August 6 by fellow voice actor Mário Tupinambá Filho on Instagram.

A machine translation of the image text reads: “It is with a bleeding soul that I announce the departure of Christiane Louise. I love you forever, Zinha.”

Christiane Louise had been a voice actor and dubber since 1994 and, as well as many screen roles, was the Portuguese voice actor for Mercy in Overwatch, Cortana in Halo, Sivir in League of Legends, Bayonetta, and dozens of other roles. Dublapédia Brasil, a site dedicated to voice dubs, posted the following tribute show casing some of her best-known roles.

The suspect is Pedro Paulo Gonçalves Vasconcellos da Costa, 27 years old, who was arrested on Friday, 13 August by Brazilian homicide detectives. He was accused of murdering Christiane Louise on July 22 of this year in her apartment in the south of Rio. The cause of death was multiple stab wounds.

According to a report in the Brazilian newspaper O Globo, Leandro Costa, the lead investigator, detailed that Christiane Louise usually lived alone but had been sheltering Pedro Paulo in the weeks leading up to her death. When asked about her disappearance, her killer initially claimed he hadn’t spoken to her since June 17, and that she had travelled to Mangaratiba, another area of Rio, with a boyfriend, and would be away for 15 days.

Under further interrogation Pedro Paulo confessed to the killing, though with a claim he was acting in self-defence because Christiane Louise was “possessed by the devil”. The authorities further allege the killer was assisted by his mother, Eliane Gonçalves Vasconcellos da Costa, and another yet-to-be-identified accomplice, to hide the body on Grumari Beach. The accused’s mother remains at large.

Fans of Christiane Louise’s work and the games she starred in have been posting tributes, with the most frequent being Mercy’s cry upon resurrecting her comrades: “heroes never die”. Among the games industry figures paying tribute was Frank O’Conner, formerly of Bungie.