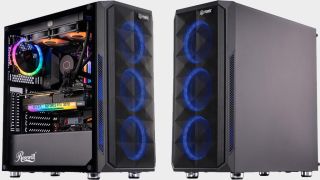 We all know the situation—GPUs are incredibly difficult to find in stock, though it’s a little easier if you’re also in the market for an entire PC. If you are, have a look at the ABS Gladiator. It pairs an Intel Core i7 10700KF processor with an EVGA GeForce RTX 3070 FTW3 Ultra, and is marked down to $2,099.99 at Newegg right now.

That’s $100 below its list price, which apparently qualifies it as a ‘Shell Shocker’ deal. What’s actually shocking is that it is in stock, though probably not for long. Even in two-grand territory, I don’t anticipate this gaming PC being available for very long (it’s listed as in stock at the time of this writing).

Is it actually a good value, though? Part for part (and including the cost of a Windows 10 license), I came out to around $1,730. So you’re paying a few hundred bucks above the DIY route, except not really. In today’s landscape, consider yourself very lucky if you’re able to grab a GPU anywhere near its MSRP.

In this case, EVGA’s custom cooled GeForce RTX 3070 sells for $689.99 in a parallel universe where silicon is plentiful. However, a quick look at the most recently ended listings on eBay shows that RTX 3070 cards in this universe are fetching $1,200 and up. That’s more than half the cost of this entire PC, and a big reason why it will inevitably sell out.

Price analysis aside, this is a well-rounded gaming system. The aforementioned CPU and GPU sit inside a high-end Gigabyte Z590 Aorus Elite AX motherboard, as does 16GB of G.Skill Trident Z RGB DDR4-3200 RAM and a 1TB NVMe SSD. It’s all powered by a 750W power supply unit that is 80 Plus Gold certified.