Hot News You can buy an official Atari console again, if you've lost all self-respect 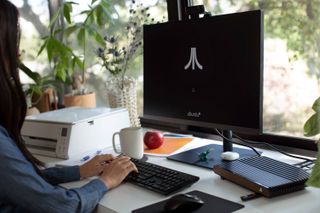 Following years of delays, the new Atari VCS system has officially launched. What do you mean you’re not intrigued by a nice box with a low-power original Zen embedded CPU for $300, or $400 with controllers? Pffft kids these days.

Seriously though: the only good thing about this is the look. While Atari boasts that the VCS is “a modern console / PC hybrid” machine, the reality is that the Ryzen R1606G processor this is based on is, by today’s standards, old and graphically weak—especially at this price. For comparison’s sake, and yes I appreciate this isn’t in the PC space, the Xbox Series S offers a much more powerful custom Zen 2 CPU, beefier GPU, and really fast storage for the same price.

Got to love some of the promo images though. I don’t know about you, but my young children love to use my home cinema system to play Pong.

It’s hardly surprising a company that’s tried everything from fantasy hotels to selling NFTs should produce an underpowered and overpriced device, though to give credit where it’s due I suppose making anything during the contemporary chip shortage is an achievement. Atari’s ‘vision’ of a Linux machine with other games you can download is, however, unlikely to persist in the long-term.

Should you have the kind of retro nostalgia that the Atari VCS is trying to play off, because I do get a slight nerd lust from looking at the gorgeous walnut version, you’d be better off building a tiny retro PC: buy a Raspberry Pi and pick up an imitation VCS case on Etsy. I mean, here’s an Engadget article from 2012 explaining how to get Atari 2600 games running on the original Raspberry Pi.

Atari, or the company it once was at least, will always hold a hallowed place in gaming history: and the original VCS will always be the first console that really broke into the mass market. This new Atari VCS, sadly, is unlikely to add much of value to such a legacy.

Leave a reply "Hot News You can buy an official Atari console again, if you've lost all self-respect" Cancel reply