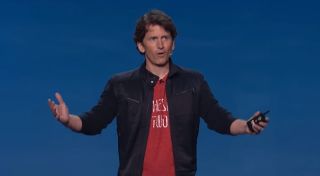 Now that Bethesda is part of the Microsoft family and Starfield will be released exclusively on PC and Xbox, Todd Howard spoke to the Telegraph about what that means from a development standpoint. “By focusing on those platforms, you really get to lean in a lot on making it the best it can be for those systems,” he said. That isn’t unreasonable, as developing for PC and Xbox means the team won’t have to make sure their game adapts to Playstation hardware, although Howard doesn’t specifically mention Sony’s console with the statement.

“The hardware definitely helps us do a lot of things with loading and fidelity. But, you know, graphics fidelity is graphics fidelity. I don’t want to come across as like the graphics fidelity is a barrier, do you know what I mean?” he goes on to say. “It’s really about focus, that’s what I would say. It’s nice to put the bar high, obviously, but it’s really good to be able to focus and say this is what we’re creating, and here is the bar. Oftentimes, that is governed by just the timing of where you’re at, and where the hardware is at. We’re really fortunate that we get to set the bar really, really high.”

Howard’s way of talking about it definitely sets expectations for Starfield rather high, seeing as we’ve yet to see any gameplay footage. But beyond hardware capabilities (and a big bag of money), partnering with Microsoft to Howard is about more than a beefy space game.

“Going back since Morrowind, every game I’ve done we’ve had a pretty deep partnership and developed technology together and other things.

We gave a lot of thought to where we want to end up, and we talked to Microsoft for a long time about potentially doing something like that. We love their platforms, and really the people there. We have a lot of deep friendships. And at the end of the day, I think it’s going to allow us to make the best stuff we ever have.” Xbox’s media strategy, including day one Game Pass releases that can also be played over the cloud, is part of the reason Howard seems satisfied with the Microsoft/Bethesda partnership. “We’re big believers in all of the avenues that Xbox and Microsoft are doing to get games to more people. Whether that’s the integration with the PC, which is huge for us, or the cloud streaming and all those things. So I think it’s about taking a long-term view.”

Taking all of this into account, his response when asked if he’ll regret not getting games onto the Playstation anymore is one that pricks up your ears: “Well, we’re still…I will just say I want everybody to have the ability to play it in some fashion.”