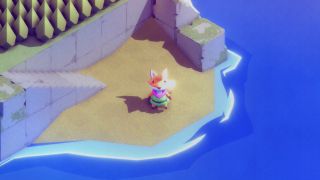 This year’s E3 was a bit of a mixed bag for me—turns out knowing a showcase during a pandemic can’t deliver swathes of new games isn’t quite the same as actually experiencing it. The big publishers held  underwhelming presentations that acted broadly as a reminder of the things we already knew about. But as the saying goes, one developer’s loss is another’s mad opportunity. Because not as many games crowded our minds as usual, I do feel like we’ve had more time to appreciate the embarrassment of riches that is gaming beyond AAA.

To be fair, we always strive for balance at PC Gamer. Our best of E3 2019 list included games such as Hollow Knight: Silksong, which unfortunately sat out this year’s E3, Sam Barlow’s FMV thriller Telling Lies, and John Wick: Hex. This time, games such as Sable, Death’s Door and Starmancer turned our collective heads. But that doesn’t scratch the surface of the games shown at E3. The Day of the Devs showcase, which was part of Summer Game Fest, dropped 16 games in 90 minutes like it was nothing, and unfortunately for my wallet, I liked the look of all of them. The Wholesome Games showcase, meanwhile, went even further, somehow squeezing over 75 games into an hour-long showcase.If there is one thing I fear coming out of this E3, it’s that as hyped as I am for a lot of these games now, there is just no way I will be able to play all of them. Thank god for Game Pass: with a large number of less well-known games coming to the service on day one, a lot of them will find an audience simply because they’re available at a fraction of their individual price.

Enjoying indie games has always been like that —balancing money, time and my dwindling attention span to give as many games a go as possible, because there are just so, so many good ones out there. But a showcase is a competition for our collective attention, one that usually ends with indie games losing out to big titles. Only the pandemic, a time when everyone scrambled to find new ways to keep trade shows alive, leveled the playing field. Presentations like the Guerilla Collective have grown in size and recognition, and thanks to demo events like Steam Next Fest, all of us can now play the games previously only those willing to brave a showfloor could get their hands on. If 2020 was the practice run for presentations beyond what the big publishers had to offer, certain showcases such as Wholesome Games had a certain brand awareness on their side this year.

As difficult as indie development is, I still feel the number of new studios is constantly growing, and now these games provide entertainment in a time when bigger companies are taking their time, so to speak. Indie games profit from every time they get to tell you they’re around—games like Tunic or No Longer Home have been in development for years, but with few opportunities to blow the big marketing horn, appearing at an E3 showcase means a lot more to them than it might for, say, Far Cry 6.

Many games deserve attention, but only few will get it. That’s the sad truth of the gaming industry, but E3 has proven that the idea “there are no games”, something I’ve kept hearing throughout the year, couldn’t be further from the truth. If you’re still catching up, check our list of every game at E3 2021, and marvel at all the games.

Leave a reply "Hot News If E3 2021 had any winners, it was indies" Cancel reply