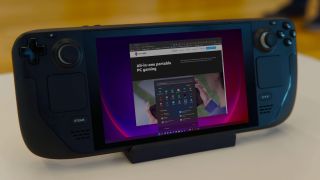 Valve has told us there is nothing it’s seen in the development of the Steam Deck that suggests it won’t be compatible with Windows 11 at launch.

That might seem like a given, seeing as it’s already spoken about the current generation of Windows OS being functional on Valve’s upcoming handheld gaming PC, but there have been a host of potential compatibility issues cropping up since Microsoft announced the next-gen version of Windows.

Most significantly the confusion around what version of the Trusted Compatibility Module (TPM) is necessary to get Windows 11 installed on your machine. Microsoft’s initial health check tool suggested a great many of our PCs weren’t compatible, and it led to a rush on third-party TPM boards.

“There’s work looking at TPM just now,” Valve Steam Deck designer, Greg Coomer, tells us. “We’ve focused so much on Windows 10, so far, that we haven’t really gotten that far into it. Our expectation is that we can meet that.”

But it’s not just down to Valve as the makers of the new handheld hardware, it’s also something it has been talking about with AMD itself. As the creators of the custom silicon at the heart of the Steam Deck—the Zen 2/RDNA 2 APU—the red team is there to ensure that, at the fundamental level, the new tech is ready for Windows 11.

“It’s also a conversation that’s going on with AMD,” Coomer explains, “to make sure that, at the BIOS level, we can accommodate that. So there’s nothing to indicate to us yet that there’ll be any issues with Windows 11.”

This is good news for anyone wanting to replace the shipping SteamOS 3.0 with Microsoft’s new operating system. But, from what we’ve seen, and from what Valve itself says, I’m personally not convinced that’s a route I’d be willing to go down.

If Valve is able to smash its goal “for every game to work by the time we ship Steam Deck,” through its work on the Proton/Steam Play compatibility layer, then I’m going to stick with SteamOS.

In our hands-on time with the Steam Deck itself we’ve been hugely impressed with how the new SteamOS 3.0 UI looks and feels on the handheld machine. It’s a console-like experience that you’re going to struggle to emulate on a Windows 11 system.

Maybe Valve will create a Little Picture Mode, specifically for handheld machines that also works outside of SteamOS 3.0, but for now the native Linux operating system that ships with the Deck looks like it will give PC gamers the optimum handheld experience.