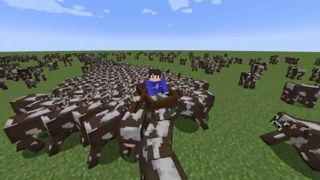 There’s a couple of ways to get from point A to point B in Minecraft, but each has a downside. Riding a horse is one, but you need to tame it first. Another is the classic minecart, but you need to lay down miles of track to make it actually work. The fastest way is actually by boat, but you need a body of water to use it. Or do you? One Minecraft player has found an ingenious way to use a boat without any water. They instead use hundreds of cows.

Minecraft player oaleksander has found a new type of transportation, one that uses a single wooden boat and a huge crowd of cows. A video uploaded to Reddit shows oaleksander sitting in a boat on top of the herd, then rowing through the cows as if they were water.

The trick here is to hold a bundle of wheat as you row, that way the cows get attracted to the wheat and so stay packed together and near the boat. It’s ingenious, and what makes it even better is that it’s totally possible for this transportation to be used in Minecraft’s survival mode. You would just need a lot of cows.

In other Minecraft news, the sandbox’s most anarchic server was brought to its knees by griefers using an exploit that ravaged the server and its players. If you’re after more uplifting news, a Stardew Valley fan recreated Pelican Town in Minecraft with brilliant results.