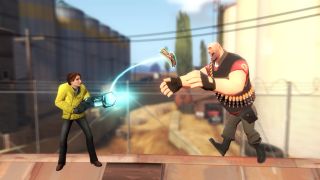 Garry Newman, founder of Facepunch Studios, has said the studio behind Rust and Garry’s Mod is helping Easy Anti Cheat (EAC) in its quest to get its software compatible with the Proton compatibility layer for Linux. That’s good news for Steam Deck fans, as the reason many popular games are unable to be run on Proton is due to anti-cheat software.

Proton, also known as Steam Play, is a compatibility layer from Valve that enables games built for Windows to run on a Linux system. It’s recently taken the limelight thanks to the Steam Deck, Valve’s PC gaming handheld running SteamOS, which is built on Linux. Yet it’s also a tool used by many Linux systems to play games that otherwise have no Linux version.

Or with Linux versions that ended up not playing as well natively as via Valve’s smart Proton tech, as is the case with Rust.

The problem right now is that, for many online games, anti-cheat software currently struggles or downright refuses to run with Proton in many cases, and that’s a big issue for Valve and the wider Linux gaming community.

The Steam Deck is already acting as an accelerant for Proton development, it seems, and specifically anti-cheat compatibility. Valve has set itself a goal of getting every Windows game working on the Steam Deck by the time it ships, whether it’s fitted with anti-cheat software or not.

“Our goal is for every game to work by the time we ship Steam Deck,” says Eric Petersen in a ‘Steam Deck for Developers’ video. “We are constantly building on Proton and there’s a lot of work that has been done that doesn’t yet affect the opublic verison of Proton. Including testing of thousands of games, engaging with third parties, like anti-cheat providers, work targeting game compatibility, and more.”

That means making every Windows game operational through Proton, not just a few special cases, by December. The only way Valve can realistically do that is by helping anti-cheat developers solve the Proton problem.

Thankfully, it looks like work is well underway, and game developers are already involved, too, according to Newman.

There’s also the added bonus here for Rust fans, who can at least be confident that if Proton can find a way to play nicely with anti-cheat software, Rust will be working “good” on the Steam Deck, according to Newman.