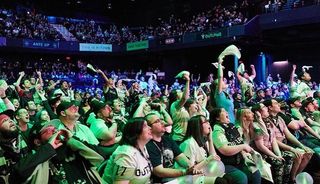 The Overwatch League could be losing two major sponsors in the wake of a lawsuit alleging widespread discrimination and sexual harassment at Activision Blizzard, according to a new Washington Post report, which says that both Coca-Cola and State Farm are now reconsidering their relationship with the company.

For the moment, both companies, along with Xfinity, IBM, Cheez-It, Pringles, and Teamspeak, remain listed as corporate sponsors on the Overwatch League website. But a State Farm rep told the Post that it is “reevaluating our limited marketing relationship with the Overwatch League,” and the company has asked that its ads be pulled from matches running this weekend.

A spokesperson for Coke apparently didn’t refer to any immediate actions, but confirmed that the company is aware of the allegations against Activision Blizzard and is “working with our partners at Blizzard as we take a step back for a moment to revisit future plans and programs.”

The Coke and State Farm step-backs come just a few days after branding for communications firm T-Mobile was removed from the Overwatch League and Call of Duty League websites. T-Mobile didn’t comment on the removal, but the assumption is that it too is distancing itself from Activision Blizzard’s troubles.

Activision Blizzard employees have been pushing hard for meaningful changes at the company, and their efforts are achieving results. But it’s corporate-level blowback like this that’s more likely to light a fire under Activision’s ass, because it’s both a public relations mess and a financial hit—a relatively minor one, perhaps, but under the circumstances it’s highly unlikely that anyone else will be willing to step in and fill the void.

The timing isn’t great either: The Overwatch League announced just a couple of weeks ago that well over a year after halting live-action events because of the Covid-19 pandemic, it will return to in-person action for its 2021 playoffs and Grand Finals in September.

CEO Bobby Kotick promised earlier this week that “people will be held responsible for their actions,” and committed to firing not only offenders but also any managers or leaders who impede the company’s investigations into complaints. But alongside the initial lawsuit filed in July by California’s Department of Fair Employment and Housing, Activision Blizzard is facing a second legal action on behalf of investors, and employees are showing no signs of easing up on its demands: A group calling itself the ABK Workers Alliance recently rejected Kotick’s delayed response to employees and selection of the WilmerHale law firm to conduct an internal policies and procedures review.

I’ve reached out to the Overwatch League for comment on the situation and will update if I receive a reply.