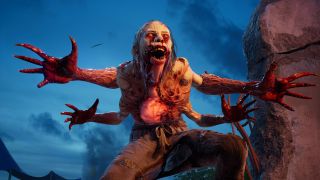 I’ve been conflicted about Back 4 Blood since playing the public alpha back in December 2020. Every time I play it, I find little glimpses of what looks like the Left 4 Dead 3 that I’ve wanted for the last 11 years—a satisfying axe swing that cleaves three zombies at once, a clutch headshot that opens a gap in a horde, a narrow escape into a safe room as a teammate slams the door behind me. Those moments still rule.

Not long after these zombie touchstones, though, I’m reminded of just how different Back 4 Blood is than its predecessor. Back 4 Blood rejects L4D’s smooth running and gunning for Call of Duty’s stopping and popping. Details that are meant to add mechanical depth like aim-down-sights, limited sprinting, and an in-game economy overcomplicate the casual magic of Turtle Rock’s previous games.

Back 4 Blood’s PvP Versus mode, which I briefly tried out in an early play session of this week’s open beta, might exemplify this best. Versus is a 4v4 showdown between a team of human survivors and a team of special infected. Team Human’s goal is to fend off waves of player-controlled super zombies (as well as typical AI grunts) while Team Infected throws bodies at the problem until every survivor is dead.

Back 4 Blood Versus plays out a little more like L4D’s Survival mode, interestingly. Like that stand-off mode, you’re not moving from point A to point B. Versus matches don’t take place on campaign maps, in other words, but small, square-shaped arenas. Survivors hunker down in these micro maps (we played two, both with a smattering of buildings and exterior cover) and survive as long as possible. Teams then switch sides and try for a better time.

This shift in objective totally transforms the flow of a match. In L4D, player zombies would have to carefully coordinate attacks around bottlenecks to slow down survivors from reaching the next safe room. Every death means more ground gained by the humans, so a smart Smoker player would bide their time and prepare an ambush for an isolated Zoey looking for a medkit.

Back 4 Blood, with its tighter spaces (the small map actually shrinks further over time, Battle Royale style), feels inherently chaotic. As a zombie team, we didn’t feel penalized for rushing in blindly and dying a lot. In one round I played an exploder whose literal job is to sprint into a crowd and blow up. The role felt similar to L4D’s boomers that spew horde-attracting goo upon detonation, except my exploder can shrug off entire clips of ammo while a boomer would pop after a bullet or two.

The durability of these special zombies is a big question mark for me. I felt so tanky that I hardly had to worry about smart positioning. Dumping credits into my defense stat with the mid-match upgrade system only made me more survivable. Unless two or more survivors focused fire on me immediately, I practically couldn’t be stopped.

On the survivor side, the bullet sponginess of enemies got annoying pretty fast, especially when I was hit with the popular combo of “ensnare me in place and spit acid at my feet at the same time.” With such surefire ways to melt away our health bars, I wish the zombie roles came with a little more risk.

Health values and attack synergies are balancing details that Turtle Rock can surely tune in future updates, but I have larger issues with the mode’s basic premise. So far, frantically defending an enclosed arena as zombies flood in from every direction isn’t as fun or interesting as pushing through a full campaign map. When death is an inevitability, victory feels more like losing less than the other team. Turtle Rock told me that the idea behind Versus is to have a shorter, more digestible mode than Back 4 Blood’s main campaign missions. I buy that argument, especially as a deterrent to rage-quitting, but I prefer the beginning-middle-end story of L4D’s old Versus format, still.

Turtle Rock hopes that building a deck of trait cards will make things more interesting. Glancing at the cards in my premade medic deck, I spotted mostly modest health bonuses that, when used with a coordinated team, could probably keep us alive longer. I’m not yet sold on the deckbuilding layer of Back 4 Blood. I’d like to see fewer cards that add minor percentage bonuses to accuracy and more that meaningfully change my playstyle (like the one that switches my standard melee attack to a more effective knife stab).

Despite feeling let down by Versus, huge improvements to technical performance since I last played Back 4 Blood left me with higher hopes than ever for the game. The latest build had a full suite of Nvidia DLSS options that seem to be helping a lot. A consistent frame rate was finally able to highlight that, yes, Back 4 Blood’s shooting is pretty darn fun. (The attachments system, which is straight out of PUBG or Apex Legends, continues to be a nice way of making each gun feel like a unique object.)

Campaign is clearly where Back 4 Blood is going to shine brightest. We got to play a little bit more of that as well with the performance boost and I had a way better time than December’s alpha. That alone is enough for me to give Back 4 Blood a proper shot with some friends when it finally releases October 12.