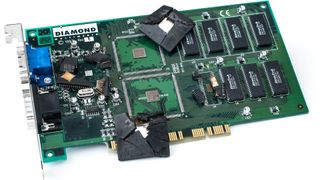 The cruelest thing about the whole 3dfx comeback ruse is that we’re all kinda desperate for it to be true. At a time where it’s arguably as hard as it’s ever been to buy a new graphics card, the idea of having another option is tantalising. That’s why we’re all so keen to see what Intel’s Xe DG2 discrete cards can actually offer, and why it behoves the erstwhile CPU manufacturer to get a move on and get it out into the market.

So when @3dfxofficial popped up on Twitter last week promising that “3dfx Interactive is coming back, 20 years later,” there was a mix of incredulity and guarded excitement. It teased an announcement for August 5th, but with nothing but a Twitter slideshow that reads like a bad pitch from the Shark Tank (or Dragon’s Den, for my UK droogs) to show for it, I think we can now be pretty confident we’re not going to be getting a whole new range of Voodoo graphics accelerators.

No matter what it says about working on “3dfx Voodoo 6 PCI” products to introduce at “CEC 2022” we’re unlikely to see anything like a new graphics card at the Council for Exceptional Children conference in January. Or even the Consumer Electronics Show, for that matter.

But what if it had been true? What if, by some miracle, a super-smart gang of engineers got together to forge a new 3dfx Interactive? For those too young to remember what 3dfx means to PC gamers of a certain age, it basically made possible the fully 3D gaming worlds we take for granted today.

Back in the late ’90s your PC graphics card was a very two dimensional affair, with the pixelated world of Doom and Hexen about as 3D as you were going to get. By the time we were throwing Quake’s actual 3D graphics into the mix your Matrox Mystique 2D/3D card was struggling to get anything like a playable frame rate.

So enter the 3D accelerator. A secondary circuit board to accompany your regular 2D graphics card, connected via a passthrough cable to your monitor. 3dfx’s Voodoo cards were a revelation, adding texture and fluidity to genuinely three dimensional worlds that simply weren’t playable before.

By the time Quake 2 and the Voodoo 2 rolled around in ’97 and ’98 respectively, 3dfx had cemented its place in the market as the go-to accelerator board for PC gamers. Though only temporarily, because then Microsoft went and ruined things by introducing the universal Direct3D API which any GPU maker could use, and suddenly 3dfx’s offering lost a lot of its value.

To the point that Nvidia swooped in as the new millennium arrived, bought up all its IP, and left it to file for bankruptcy just a few years later.

There is the potential that Nvidia’s 3dfx trademarks have lapsed and that some Jansen Investments firm may have acquired the rights to them. And if those rights were going to be genuinely attached to some disruptive new GPU tech, at the same level as the original Voodoo cards, we’d be in for a wild ride.

Some sort of GPU accelerator, an add-in board that could augment the power of your existing graphics card, could be a game-changer for a world where upgrading your whole GPU is more expensive than ever before. Being able to drop an affordable new card into your system and get higher frame rates without dropping your old GPU in the trash would be good for gamers, and stop a whole bunch of silicon hitting the scrapheap.

What if 3dfx had been introducing a ray tracing accelerator, though? What if the new Voodoo 6 PCI was going to be a board with some smart silicon that could perform the same bounding volume hierarchy shiz that Nvidia’s RT cores do, but at many times the speed? A secondary board that could offload the work, speeding the whole process up could have been a big deal.

Though also pretty tricky to get working in any way that didn’t introduce a ton of latency and a heap of other technical problems… but whatever.

And, to be fair, the last time something like this actually happened, with the Ageia PhysX game physics accelerator cards, Nvidia just popped up again, bought up the company and the IP, then swallowed the tech up into its own GPUs bricking the original discrete hardware.

Unless the 3dfx Twitter trolling iraculously turns up actual silicon at CEC 2022—and the exceptional kids get to play Battlefield 2042 at unprecedented frame rates— the dream of adding more GPU makers to the market is surely dead.