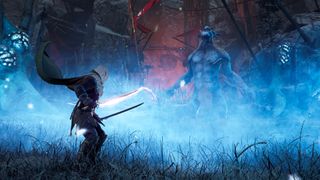 Drizzt Do’Urden was designed as the archetypal western hero—John Wayne with pirate swords. This was a drow who turned his back on the systemically cruel society he was born into, and instead chose to fight for his chosen family of dwarves and humans on the surface. By now, three decades after Drizzt was first written into RA Salvatore’s novels, there’s nobody in Faerûn who hasn’t had a brother, niece, or second cousin saved by the Hunter. Yet they’ll never truly accept him—even as he pushes back the wilderness, Drizzt cannot belong in any town or metropolis, only finding home on the road.

Don’t feel too bad about that: paradoxically, in our world, Drizzt has become a hugely popular character, the prom king of D&D. As a consequence, despite his fabled outsider status, he’s forever showing up for cameos in PC games—like a British celebrity constantly dining at The Ivy while complaining about the paparazzi. Imagine Geralt, if he grudgingly did autographs.

Will Double-D be kicking about in Baldur’s Gate III? Don’t bet against it. In the meantime, let’s collate his many appearances to date. Welcome, friends, to the Drizzt lizzt.

It may sound like a blood-based pizza recipe, but Menzoberranzan is in fact the notorious drow city-state that Drizzt grew up in. After featuring in the wildly popular Dark Elf trilogy of novels, the place became a fixture of the Forgotten Realms, resulting in an Advanced Dungeons & Dragons Computer Product (miss you, ’90s) of the same name.

Drizzt is first seen in this dungeon crawler leaping from a high ledge to mince an unlucky giant—a showy audition that immediately wins him a slot in your party. His two-million-plus starting XP doesn’t hurt either—carrying new players through the first fights of the game before, in characteristic style, he moves on. You can only thank him for his (fan) service.

Ten gnolls, one drow—with the latter asking for your help in beating off the monsters. That’s the situation you happen across in the woods, though I’ve made it sound unnecessarily rude. There’s just something about Drizzt’s earnestness that invites teasing.

Mind you, he’s not so po-faced here as in Menzoberranzan. This time he’s comically haughty, and a little quicker to frustration. “Choose your side quickly,” he growls, “for I need to know whether to extend my hand or my blade.”

Succeed in gibbing those hands, and the blades are yours. Yep: Bioware lives up to its reputation for choice by enabling you to kill Drizzt. If you think you’re hard enough.

How’s this for choice and consequence? If you take out the hero of the Ten Towns, he’ll survive his wounds, retrieve his weapons, and ultimately come for you an entire game later. Drizzt isn’t necessarily after blood, but rather an explanation for your actions—whether that be racism, psychopathy, or a fondness for dual scimitars with +3 slashing damage. Of course, you can always murder him again, definitively this time. Always confirm your kills, is the moral lesson here.

In a further twist, if you build an elf named Drizzt in character creation, then make a name for yourself as a villain, Drizzt will defend against the harm done to his reputation by causing you as much physical harm as possible. Even a reformed follower of Llolth will seek revenge for his ego.

The PC missed out on Drizzt’s appearances in the original Dark Alliance games, but got this superior hack ‘n’ slash instead, from the makers of The Two Towers on PS2. RA Salvatore was heavily involved, and you can tell, from the way the plot scribbles in the margins of his novels at the time.

As in Shadows of Amn, Drizzt rocks up to Demon Stone with his Mithrill Hall entourage—namely Thibbledorf Pwent, the risk-loving dwarf with a spiked helmet who likes to fall on his enemies and wriggle about like a beached fish, shredding them with his armour. But among the bloodshed, Drizzt still spares a moment to promote multispecies friendship. Aww. Fillet of troll, anyone?

Poor Drizzt very specifically left the Underdark—as in, didn’t want to be there—but videogame developers have been determined ever since to drag him back. He was persuaded downstairs once more for this expansion, which saw RA Salvatore briefly employed as a guest quest writer. The author is nothing if not accommodating—always finding a way to bend the Do’Urden saga to fit the whims of D&D’s multimedia launch schedules.

Weather enough woolly MMO combat and you’ll also get to meet Drizzt’s best dwarf mate, Bruenor Battlehammer, who sports a noncommittally ‘regional’ British accent more abominable and cursed than anything in the demonic army they face off against.

If you think Drizzt and Minsc meeting up in Neverwinter sounds like fan fiction, wait til you see Idle Champions—a clicker game that gleefully indulges in match-ups of Faerûn favourites from across time and actual play podcasts. This particular Drizzt comes in three different skins, like Hannibal Lecter infiltrating a Hitman level, and does 400% damage when marching in formation with his friends. But isn’t that true for all of us?