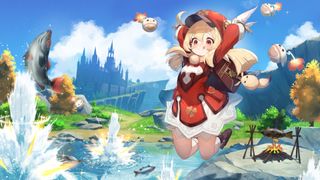 Want to find out what’s coming in the Genshin Impact 2.1 update? Inazuma’s been fun: we went to a festival, saw some fireworks, fought a god, and died from electric shocks more times than we’d probably care to admit. But version 2.1 is rapidly approaching, and as ever, we all want to know who we’re wishing for, and what new events and features are arriving in the game.

As has become usual now—due to beta tests and data mining—we already have a pretty good idea about the characters and content coming in Genshin Impact 2.1. But although they tend to be right, the following details are all subject to change. And just like version 2.0, there are definitely some new additions to get excited about: slapping bosses into submission with a giant fish, for one.

If you’re still working your way through Inazuma, this Genshin Impact Electroculus locations map might come in handy for levelling Statues of the Seven. We also have a guide for getting past that tricky Genshin Impact Baal boss fight. Otherwise, here’s everything we know about the new stuff, including the Genshin Impact 2.1 release date, characters, events, and that feature we’ve all been waiting for: fishing.

This is based upon miHoYo’s regular update schedule. It hasn’t been officially announced yet, but judging from past versions it’s likely this date is correct.

If leaks are to be believed, we have four Genshin Impact characters to look forward to in 2.1:

Raiden Shogun
Also known as Baal, the Raiden Shogun is a five-star Electro polearm-wielder who many will remember from their fight with her during the most recent Archon quest. She’s the de-facto leader of Inazuma and pursues eternity by gathering visions and inlaying them on a mysterious statue. According to some data miners, Baal’s banner releases on September 1, but others believe that she won’t be playable in 2.1. So we’ll have to wait and see on that one.

Kujou Sara
Arriving alongside Baal is Kujou Sara, a four-star Electro archer and general of the Tenryou Commission. She appears a couple of times during the Inazuma Archon quest, including at the battle between the resistance and the Shogunate, but all we really know about Sara is that she’s loyal to Baal and is a descendant of the Tengu, a tribe of speedy, black-winged warriors.

Kokomi
Sangonomiya Kokomi is the Divine Priestess of Watatsumi Island and a five-star Hydro catalyst-user. Though she’s more of a healer than a fighter, her strategic smarts and leadership are what has kept the resistance alive this long. She’s rumoured to be part of version 2.1’s second banner, which is slated to arrive on September 21.

Aloy
The red-haired huntress from Horizon Zero Dawn is coming to Genshin Impact 2.1, though only on PS4 and PS5 at first. If you want to snag Aloy in Genshin Impact on PC you have to wait until version 2.2, or potentially use the new Genshin Impact cross-save feature to claim her on PlayStation before using her on PC. Although the chance of that working are unlikely.

It looks like we’ll be getting two of Inazuma’s remaining islands—Watatsumi and Seirai—but not in 2.1. Instead, it’ll be part of Genshin Impact 2.2 (via Genshin Intel). Watatsumi is blanketed in a dense, colourful forest and is home to the Sangonomiya resistance and Kokomi. It makes a lot of sense that we’d get this island when you consider we’re getting Kokomi as a character, too.

Seirai island, on the other hand, fell victim to a strange disaster and is now perpetually engulfed in a powerful thunderstorm. I think that just as Watatsumi will reveal more details about Kokomi, so too will Serai and its past reveal more about the Raiden Shogun, Inazuma’s troubled history, and her motivations. This will leave Tsurumi as the final island to be added to the Inazuma map.

We don’t know anything about the changes to the map for 2.1 yet, but we’ll update this section when we know more.

Like me, you’re probably most excited for the fish claymore, but plenty of other Genshin Impact 2.1 weapons have leaked ahead of the special program:

There are five Genshin Impact 2.1 events to keep you occupied in the new version. Light Caresses the Moon revolves around Liyue’s culinary Moonchase Festival, and from the leaked promo art it seems to involve you cooking alongside Keqing and Xiangling. This event apparently also rewards you with that coveted fish claymore.