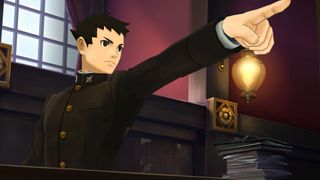 The Great Ace Attorney Chronicles is the latest release in the Ace Attorney series. It’s a bundle of two games that had previously never left Japan, both in one handy installment. The duo are a loyal continuation of the games for long-term fans, but also a great introduction to the world of over-the-top courtroom drama for newcomers.

If that’s you, the Ace Attorney games have you play as a lawyer trying to find your clients innocent. You need to investigate the scene of the crime and then present evidence in court, while also fending off the prosecution’s accusations and cross-examining witnesses.

It’s a great series of games for those who love detective tales, soapbox drama, and kooky comedy. Theatrics aside, the trials in Ace Attorney can be a little tricky, and The Great Ace Attorney Chronicles has a whole new set of courtroom systems to get to grips with.

As a seasoned ace attorney and someone who has played both games in the new installment, I’ve put together a list of trial tips for when you find yourself floundering on the defence table (a feeling with which I’m more than familiar). Here’s what you need to know to become the ultimate slick defence attorney.

Before you even step one foot into the courtroom, check your evidence thoroughly. Don’t just read the descriptions, but also look over each item with the ‘Inspect’ feature. Check the back of newspapers, look at the base of jewelry boxes, check bullet chambers in guns—each time you find something new the item’s description will be updated.

Certain pieces of evidence will get the spotlight in the trial, but if you already have the full facts before you walk into the courtroom, you’ll be one step ahead. This also counts for when evidence is entered into the court record mid-trial. Check it immediately: it’ll be important later.

The jury is relatively new to the Ace Attorney games (it was tested in a spin-off game and fans loved it), but it also means a new system to learn. Trying to find discrepancies in the juror’s six different statements and selecting two that contradict is one of the trickiest parts of the game. First, you’ll need to press each statement for more information, getting them to amend what they’ve just said with the new info.

When that’s done, look for similarities in their statements. You need to look for statements that comment on the same thing, even if it’s vague. If two jurors mention the witness, dates, weapons, the witness’ appearance, then it’s those you need to present. It may sound simple, but looking over six statements simultaneously, all commenting on different things, can be overwhelming.

The Great Ace Attorney Chronicles also introduces multiple witnesses to the stand at the same time, meaning presenting evidence at the right time is much more difficult. If pressing each statement still doesn’t give you any clues, listen to Susato. When you get to the end of a string of testimony statements, Susato and Naruhodō will have a sidebar where she will drop hints at who’s fishy. She might mention a witness’ body language, or comment on a particular detail, so pay attention to what she’s talking about to help you pin down the right testimony section or at least narrow your options down.

Trials in Ace Attorney are always filled with dramatic moments and often the judge will present you with a two-choice decision. Usually yes or no. It’s an all-or-nothing situation, but the best way to approach these situations is to be fearless. Do you have evidence to show? Yes (even if you have no idea what it is). Is this detail important? Definitely (even though you have no idea why). Should this be added to the witness’s testimony? Absolutely (who knows what for). Sometimes you need to wing it even if you don’t know what you’re doing. It’s the quintessential Ace Attorney way.

Knowing when to present evidence is the crux of trials in Ace Attorney. If you’ve worked out which part of the testimony to select, but you have absolutely no idea which item to present, here are a couple of things you can do. Keep track of what evidence has already been presented, chances are it won’t come up again (but keep in mind key items like an autopsy report will be used more than once).

When you’ve done that, break down the testimony and look at the keywords. If they’re talking about dates and times, look for newspapers or diary entries. If it’s about the way the crime was carried out, look at objects rather than paperwork and profiles. Looking for links is a key factor in presenting the right evidence at the right time.

For those times when you are truly stuck, The Great Ace Attorney Chronicles has a super useful ‘Story Mode’ option where the game will automatically play out for you, presenting evidence and pressing witnesses included. You can easily toggle this option off and on with a single key, making it perfect for quick solutions. Every lawyer needs occasional help.

So there you have it. The best Ace Attorney tips and tricks to help you get your innocent clients off the hook. If you’re keen to play other titles in the series, check out our Phoenix Wright: Ace Attorney Trilogy review that covers the first three games in the series (and are also very, very good).