Hot News Less than one month before launch, New World is delayed again 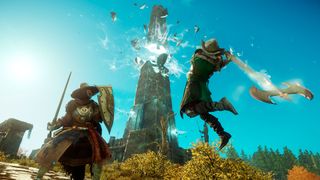 Less than one month before it was set to go live, the fantasy MMO New World has been delayed yet again. Amazon announced today that based on feedback received during the recent closed beta, it has decided to take a little more time to tighten things up, and push the launch back until the end of September.

“We want New World’s launch to be a smooth and fun experience for all players, and that means making some improvements based on what you encountered during Closed Beta,” the New World team tweeted. “So we’re going to take a few extra weeks to smash bugs, improve stability, and polish the game. New World’s new global launch date is September 28, 2021.

“This was not an easy decision to make. We know this isn’t the first time we’ve changed our launch date in pursuit of quality, and that it can be disappointing to wait a bit longer. But we want to be sure we deliver you the highest quality game at launch. Thank you for your support and feedback.”

New World was initially scheduled for launch in May 2020, but it has indeed been delayed multiple times previously, most recently (until now) in February, when the August 31 date was set. The Covid-19 pandemic took a toll, but reaction to the game has also been an issue: In July 2020, Amazon pushed New World into spring 2021 and suggested that alpha testers were dissatisfied with a lack of deep-game content.

“We want to ensure that the most dedicated players have plenty of middle and endgame experiences as they venture through Aeternum,” studio director Rich Lawrence said at the time. “We want our players to feel completely immersed in the game, and know that our studio stands for quality and lasting gameplay you can trust—and that means added time to get things where we want them before we fully release.”

The closed beta test has also struggled to impress. People are clearly interested in what it has to offer—the test surpassed 200,000 concurrent players on Steam at one point—but our online editor Fraser Brown described it as “an awkward MMO” with “cookie-cutter quests and threadbare narrative” (although he did enjoy the survival game aspects), while guidesmith and MMO fan Sarah James said in a separate preview that it felt “incredibly grindy and frustrating” after just a few hours of play.