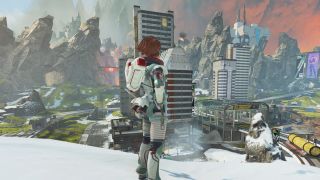 World’s Edge needed a makeover. A pristine Icelandic wilderness when added in Season 3, Apex Legends’ second map was done dirty by subsequent updates. The sky was blackened, industrialisation destroyed many of its green fields and, most criminal of all, the high-speed railway service was removed. By the time Season 9 rolled around, it was in a right state.

This week Apex kicked off its tenth season, Emergence, with a sweeping rework to the ailing map. And fair credit, it’s a strong one. The bland grey factories at Sorting and Refinery have been sunk under lava, replaced with brighter new facilities. Snow has swept over much of the north of the map, Trainyard has been levelled, and the return of blue skies has brought vibrant greens and reds back to World’s Edge. The trains may not be back, but Cable Cars at the new installations are a fun homage to the game’s long-lost rail infrastructure.

Emergence has fixed some of World’s Edge’s biggest flaws. But it didn’t solve the biggest one. For all its fixes, World’s Edge is still dominated by a dense, miserable urban sprawl nestled right at the heart of this striking landscape.

Fragment, previously known as Capitol City, has always been a problem, not least because it’s almost impossible to avoid being drawn into the area. Taking up a large part of the center of the map, rotations through the map often detour through the city’s outskirts, especially as the ring closes. Once you’re there, leaving Fragment becomes a proper ordeal. Littered with vantage points and sniper windows, movement through Fragment is a slog.

Defensive heroes like Caustic and Wattson can turn entire tower blocks into forts, while a well-placed Rampart could be lurking behind every intersection. There are third-parties to every fight, and nobody wants to leave the city until the ring demands they have to.

Apex is at its dullest when squads get the chance to hunker down, and Respawn must’ve agreed when they fragmented Fragment in the first place. But that change may have arguably made things worse. Without a train to whisk you away, and with a pit of molten rock compressing Capitol into two claustrophobic halves, hoofing it out of the city became a nightmare.

That’s not to say Fragment isn’t often fun to fight in. Like the original King’s Canyon’s Skulltown, it’s the go-to hot drop spot due to its tense, urban skirmishes and frantic interior brawls. Streamers in particular love to show off in a pair of shattered buildings near the lava fissure. As a Horizon main, I’ve had a lot of fun floating up and down multi-storey office blocks with flying fancy. If you want to pick a fight as soon as possible, an express trip to Fragment will get you one.

But it often feels like the only fights are the ones taking place in Fragment. There’s a reason the community jokes that World’s Edge is smaller than it appears. If you’re not dropping in Fragment, you’ll get stuck there eventually, leaving the rest of the map feeling rather redundant. What’s the use in reworking half the map if I’m spending most games stuck in the same office blocks? Like Skulltown’s removal before it, getting rid of Fragment will give the rest of World’s Edge a chance to shine.

I have no doubt in my mind that Respawn could find a fitting replacement for Fragment. The changes to Refinery and Sorting didn’t just make those spots less drab, they turned them into more dynamic, chaotic arenas. We still have Skyhook up in the northwest to fill the role of urban battlefield, one whose slightly out-of-the-way location makes it less of an inevitability.

Maybe I’m being presumptuous. Maybe, in time, World’s Edge’s new locations will start to drag people away from fight city. But a day into Emergence, and I’m already tired of seeing the same skirmishes play out across the same tired streets. Respawn, it’s time to blow up Fragment—I promise the map will be all the better for it.