Hot News How Final Fantasy 14 brings veterans and newbies together 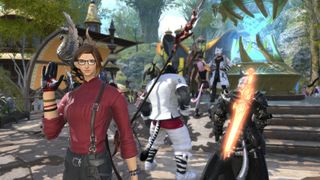 Final Fantasy 14 is often praised for how welcoming its community is to new players. Arguably it’s a big part of why the recent influx of World of Warcraft leavers have stuck around. It seems like there’s always a new post on its subreddit expressing genuine surprise at just how patient and encouraging players are, be that waiting for people to enjoy cutscenes or helping guide people through tough mechanics. It also helps that there’s always someone for new players to match with when playing early dungeons, largely because veterans will often revisit older content.

So how has Final Fantasy 14 managed to foster such a positive playerbase while other games struggle to do so? I spoke to director and producer Naoki Yoshida about how the game successfully conditions players new and old to work together and keep kindness in mind.

“FF14’s game design and the team’s policy is to not force new or existing players to play content that has become outdated,” Yoshida tells me. “Naturally, it’s important that in the MMORPG community, veterans and newcomers mix as quickly as possible. So, by providing support in the form of our systems and rewards provided, we aim to bring veteran players and newcomers together in the same party and help them on their way to friendship by letting them play together. As such, it is not important for a player to replay old content but rather, it is more important for them to interact and meet others in order to strengthen the MMORPG community.”

For new players coming into FFXIV, this focus ensures they regularly come into contact with people who can help them through the often confusing early stages of learning how an MMO works. This in turn encourages new players to stick around and eventually help newer players themselves. That’s exactly what happened to me when I first started playing in 2013—I’d never seriously played an MMO before so in my naivety I’d try to run through dungeons ahead of others like we were just playing next to each other rather than together.

As an inexperienced pugilist (a fist-fighting DPS class), I had my ass handed to me as I had no idea what the concept of a Tank was or why it was so important to stick together. A veteran player very patiently explained it to me, and after that we sailed through the tunnels of Tam-Tara Deepcroft without further incident. If it hadn’t been for their kindness I wouldn’t have stuck around.

I’m embarrassed to think back on that experience now, but I now also make a point of explaining things to people if they’re struggling—we were all new once. It’s also in a veterans best interests to do so, as everyone needs to mix and work together so being kind and taking the time to help newbies will make dungeon runs far smoother.

By continuously incorporating older content into newer progression, FFXIV ensures that older players are constantly coming into contact with newer ones. “It’s very important to share time and the gaming experience by playing the same content together,” Yoshida says. “When you do that, you become comrades in no time at all.”

“I feel the approach behind the thought process is very important,” He adds. “In FFXIV, we don’t design content with the idea of ‘somehow getting people to play old content’, but rather with the idea of ‘effectively matching new players and seasoned veterans’.  In some content that requires a significant amount of play time, like weapon enhancement content, we intentionally encourage players to revisit older content and that plays a role in facilitating party matching for newcomers. In consideration of having our existing players help out with matching, the weapon enhancement content itself is designed in such a way that it is not mandatory; players have a choice about strengthening their gear or not.”

In the latest relic weapon quest, for example, you need to collect items that can drop from large-scale FATE battles in areas from the Heavensward and Stormblood expansions. This makes sure that even older areas feel well populated and ‘lived in’. There’s a real warmth to the world as you can always see people going about their in-game day no matter your progress level—Hydaelyn is never a lonely place.

The little green sprout that appears above a new player’s head also plays an important role in fostering a welcoming community. It’s a signal to the world that you’re just setting out on your adventure and that you probably haven’t experienced all of the various fight mechanic signals that others have learned yet. It’s a simple icon that helps remind people to forgive any potential mistakes. Without it someone could assume you have a higher skill level or knowledge base and get frustrated when you quite naturally don’t have a boss fight memorised.

“Upon seeing the newcomers, veteran players are reminded of the times when they themselves used to be in those shoes, and they’re struck again with feelings of novelty,” Yoshida says. “Additionally, when they lay their eyes on so many characters with the new adventurer ‘sprout’ icon, I think they’d feel happy as an FFXIV player upon realising that the game they love still continues to grow. This makes us, as seasoned veterans, develop a desire for new players to enjoy FFXIV’s world for as long as possible, and that leads on to the kindness we show toward newcomers.”

He’s right—seeing the recent swarms of new players has been such a heartening experience. It’s so nice to be able to see and share in the joy of people fighting Ifrit for the first time, or seeing their reaction as certain cutscenes play out. It’s also made older content fresh again by providing new challenges as veterans mix with new players with much lower gear. Instead of being able to easily brute force yourself past certain fight phases, we’re experiencing fight mechanics we haven’t seen in years. Cape Westwind—the first eight-player fight in the game—was once a ridiculously easy steamroll of a fight, but with the surge in people unfamiliar with the battle, it’s starting to become the challenge it’s supposed to be again.

It’s hard not to be swept up by those positive shared experiences and help pass that enthusiasm down to others. “With support, the newcomers are able to heighten their enjoyment of the game, and will eventually develop into outstanding Warriors of Light,” Yoshida adds. “It’s likely that once these veteran players look back on their time starting out in the game, they’ll remember the support they received from the more experienced Warriors of Light back then. In such a way, they keep alive the tradition of ‘being kind to others’ with their delight upon encountering other characters marked with the new adventurer sprout above their heads.”

It turns out that the health and welcoming nature of FFXIV’s community owes a lot to Yoshida’s friends: “This is all because I myself have been playing online games since the days of Diablo and I’ve been helped by many friends together with more experienced gamers,” he tells me. “So you see, this design is also my way of giving back to online games and MMORPGs.”  Positive early experiences in turn make players return that positivity in kind further down the line. It’s an encouraging cycle that helps Final Fantasy XIV earn its reputation as a welcoming place to be.

Finally, with the upcoming Endwalker expansion on the horizon many players will want to prep themselves for any upcoming story twists and nods to the past—so, in the spirit of sharing experiences, is there any content that veterans should be revisiting in particular?