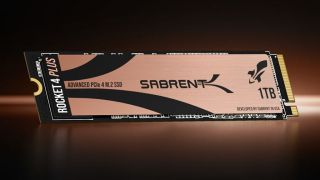 Looking to take advantage of your platform’s PCI Express 4.0 support? The latest generation SSDs can make use of the extra bandwidth, albeit at a pricing premium over PCIe 3.0 models. If you can catch one on sale, however, you can take some of the sting out of the comparative markup. Such is the case right now—Sabrent’s super-fast 1TB Rocket 4 Plus can be had for $179.98 at Amazon.

The discount comes by way of plugging in coupon code 10FVPMSX at checkout. That knocks $20 off the asking price, and while not a huge discount (10%), the Rocket 4 Plus is already one of the better-priced drives from the latest crop of PCIe 4.0 models. Combined with its strong performance, the Sabrent Rocket 4 Plus earned our Editor’s Pick award when we reviewed it in January.

Both capacities are rated to deliver up to 7,000MB/s of sequential read speed, helped in large part by the Phison E18 controller that is directing traffic. Sequential writes check in at 5,500MB/s for the 1TB model and 6,850MB/s for the 2TB drive, both of which are fast.

As it relates to reads, drives like this one are fairly closely to the theoretical limit of the interface (~8,000MB/s). The caveat is that you need a PCIe 4.0 platform to take full advantage of the speed. It will still work in a PCIe 3.0 platform, it just won’t ramp up as high.

Gaming doesn’t fully utilize faster PCIe 4.0 SSDs yet, but with Microsoft making its DirectStorage API available to developers (in both Windows 11 and Windows 10), that could change. In time, drives like this could facilitate quicker load times, especially since the PlayStation 5 and Xbox Series X/S boast PCIe 4.0 storage, providing plenty of motivation for developers to push the envelope.

If you don’t need that kind of speed or don’t want to pay a premium for it, be sure to check out our list of the best SSDs for gaming, for plenty of other options.