Hot News Apex Legends Seer guide: How to get the most from the stealthy scout 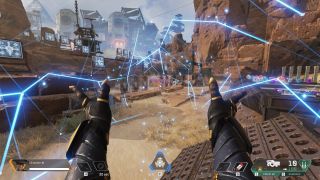 Feeling like switching up your main in Apex Legends? Seer is the latest addition to the roster in Season 10 and if you like quietly stalking your enemies, then he’s the Legend for you. Not only can he reveal the location of opponents, but he can also interrupt abilities, heal, and revive. Sounds like a real wind up

As with all Apex Legends characters, there are pros and cons to playing as Seer, so let’s look at how to get the most out of his abilities.

Seer can scan Survey Beacons to reveal the next ring location and reveal opponents’ locations. A team consisting of Seer, Pathfinder, and Valkyrie means that you’ll always stay one step ahead of everyone else, so long as they don’t also have a super Recon team on the go.

Heart Seeker visualises the heartbeats of other players when you’re aiming down sights. The closer you get to the target, the bigger the arrow will be, making it easier for you to land the killing shot. It can detect enemies within 75 metres of your position and even if you don’t have a weapon to hand, you can still use the aim function to ping the locations of enemies to your teammates.

You can toggle the effect on and off to avoid cluttering up your UI, too, but you’ll probably want to keep it on. If an enemy is coming from around the corner, you’ll get a brief warning before they appear so you can time your shot.

As with many abilities, Heart Seeker works best in tandem with Focus of Attention, which allows Seer to summon micro-drones that emit a delayed blast that reveals enemies and interrupts their abilities and actions. It has a 30-second cooldown, so you can use it pretty frequently, but you’ll want to make sure you’ve used Heart Seeker to get your teammates into position before you use it.

The effect lasts for eight seconds, and you can deal a lot of damage in that time. If you’re in the final circle, use it wisely, as you’ll be able to interrupt those using a Phoenix Kit, giving you a potentially easy victory. Focus of Attention will also reveal the Evo Shield colour of affected enemies, so you can suss out which teams in the area are the best to go after. What’s more, all affected enemies receive ten damage, so even if you decide not to ambush them, you’ll still get something for your troubles.

This is the last bit of hell you can unleash. Exhibit creates a sphere of micro-drones that reveal the location of enemies who are either on the move or firing weapons. It lasts for 30 seconds and has the potential to make your team extremely dangerous in the final moments of a match.

A word of warning: players who are crouched, but moving, will remain undetected, meaning that all players have to do in close-quarters combat is remain crouched to avoid you. Players who are standing still also won’t show up, so they can just watch for you running by a window before firing.

The good news is that enemies will appear on your minimap as red arrows if they’re discovered, as well as the area the sphere covers and how many enemies are detected at that time. The bad news is that, because you’ve tossed your heart chamber to make the sphere, it can be destroyed by enemies, so try to deploy it behind some cover.

As Seer, keep on the lookout for weakened or downed players, or teams of only one or two. His head hitbox appears to be slightly larger than other Legends’ and he doesn’t have any cool escape abilities, so time your attacks well. It’s worth noting that his entire hat isn’t a hitbox, but the area around where it meets his head is ever so slightly bigger. That’s the cost of being stylish af, I suppose.

Leave a reply "Hot News Apex Legends Seer guide: How to get the most from the stealthy scout" Cancel reply

Related Post "Hot News Apex Legends Seer guide: How to get the most from the stealthy scout"