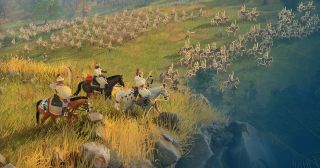 Age of Empires 4 is coming on October 28, but before that happens a closed beta test set to kick off on August 5 will give Age Insiders a chance to get their hands on the game and see what it’s really like.

The beta will include the tutorial mission, which teaches building, economics, combat basics, and “other core skills,” and will also support multiplayer and versus AI matches for up to eight. Only a “sample” of maps will be available during the beta but each will offer user-selectable options for size and appearance, while four of the eight launch-day civilizations will be playable: Mongol, English, Delhi Sultanate, and Chinese.

The goal of the beta is to fine-tune systems, hunt down bugs and balance issues, and lay some early groundwork for post-launch support. To that end, the developers hope that players treat it as an actual beta test: “Relic and World’s Edge are depending on you to play as many matches as you’re able to while trying out the various matchmaking systems.”

If you’d like to get in on the action yourself, you need to sign up as an Age Insider by 4:59 pm PT/7:59 pm ET on August 3—that’s today, so don’t dick around about it—verify your email, and upload your DxDiag file to your profile. This is what you’ll need to take part:

Note that this is a “preview spec” for the beta, and not the recommended requirements for the released game.

The Age of Empires 4 beta will be offered on both Steam and the Microsoft Store, but if you want to play on Steam you’ll also need to link your Steam account and sign up for “Steam betas” in your account preferences. Full details are up at ageofempires.com—the closed beta test is scheduled to run until August 16.