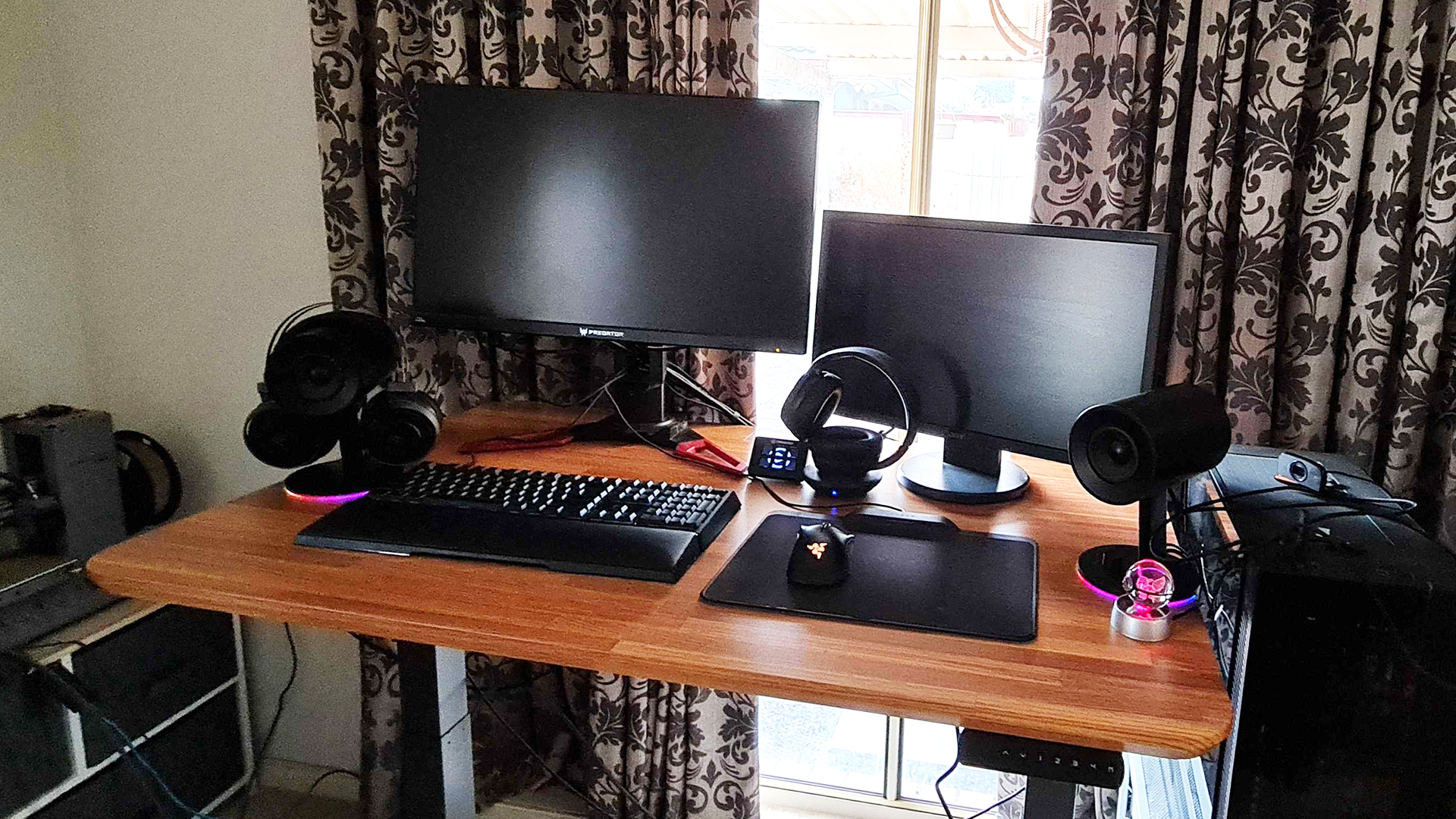 Like many who are chained to their desks for much of the day, I had started to covet a standing desk. Something to let me change up my position during the day and allow me to at least pretend there’s something healthy about my lifestyle.

The Vari Electric Standing Desk is among the more popular and affordable electric standing desks around. One will set you back $695 ($950 AUD). It’s fairly low frills for that price, and a bit smaller than some PC desks. Both of which had me concerned about how it would do as a gamer’s battle station as well as a-work-from-home surface.

After a fair amount of use, though, I’m happy to say my concerns were for naught.

Setting up the desk is a very simple process. It arrives as two packages, one for the legs and the other for the table top portion of the desk. Both are very heavy, but assembly is simple enough. The legs slide into the desk and click into place. Then it’s just a matter of fitting everything in and getting it upright. I was able to do it by myself but these parts might be unwieldy or difficult for some just for the size and weight. Once assembled the unit feels very solid, so it feels worth some initial awkwardness, at least.

The control panel for the desk slides into place a bit like the legs, and then everything can be plugged in. The instructions are easy to follow and there are two modes for the controls. One allows you to set your preferred heights so you can get back to your sweet spots. The other allows for minor and major manual changes on the fly. Both work as you’d expect, but I found I preferred to keep it manual for little changes over the course of the day.

The Vari Electric Standing Desk is rated for a max weight of 99.8kgs which should be more than enough for most people. But I wasn’t so much concerned about the weight as I was the overall size.

The desktop is 122 x 76cm, which is smaller than what I’m used to. I have a setup that currently involves two decent sized monitors, PC tower, keyboards, mouse and charging pad, Elgato Stream Deck, webcam, mic, speakers, headphones, phone charger, controllers, and whatever else I’ve left on it that day. All except my PC tower managed to squeeze on, and so long as the cables can move freely as the desk moves, the PC tower below the desk hasn’t been an issue. The desk came with a few helpful cable accessories like hooks and Velcro strips to make life easier, too.

Mounting clamps for monitors and other devices would make the set-up process even less of a problem, though I’d hardly call it one as it is.

In action, the Vari Electric Standing Desk lifts and lowers effortlessly. There’s no shaking as it shifts up and down, and the only times I’ve had any issues has been where my cable management was the culprit more than anything else. Even the noise it makes while moving is pretty minor. It may take some tweaks for your setup, but this desk is very workable on a daily basis.

It also looks quite good. The butcher block top is an attractive veneer on sturdy metal legs that don’t look out of place in a study. The top is a bit easy to dent, however, and so I have a scratch line from the feet of my monitor. It happened a lot easier than I expected, too, and I was much more careful afterwards. Still, a word of warning to anyone sliding things around on their desk.

As for seating, you can of course settle for a chair and then stand the rest of the time. However, Vari provided an Active Seat for the review, which is a stool to accompany the Vari Electric Standing Desk. These retail at $255 ($400 AUD/£325), so around half the price of the desk, depending on your region. It arrived in one piece with no assembly required, but again another large somewhat heavy package.

The Active Seats are designed to allow you to stand and lean and swivel so you’re not locked in one spot, which is the key to good ergonomics. It has a wide range of height options so you can use it alongside all the height options of the desk, but it’s also a little… odd. The nature of the seat means it’s never totally stable, which is designed to keep you moving. It does this very well, and I’ve almost fallen off a bunch of times. That said, it has also allowed me to maintain standing positions much longer than I would have without it. If you’re looking to do a lot of standing and leaning at your desk, the Active Seat is definitely helpful, but it takes a lot of getting used to and isn’t cheap.

But the Vari Electric Standing Desk itself is pretty great. It’s sturdy, easy to put together, has a quality build, and holds more weight than expected. The mechanisms for changing heights are reasonably quiet, too, and it looks good and professional in my office. Paired with the Active Seat, I have been able to increase how long I can stand at my desk, and all without sacrificing my gaming setup or productivity.