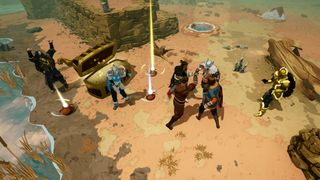 Wondering what the Tribes of Midgard Golden Egg rune does? Life in the Viking afterlife is pretty hectic, especially if you decide to dive straight into Tribes of Midgard solo. And if you’ve spent any time playing this Norse ARPG, you’ve likely found various runes that you can attach to gear or weapons to help you out.

Most rune descriptions are self-explanatory, but if you’ve picked up the Golden Egg rune, you may be wondering what it does. Here’s what we know about the enigmatic Tribes of Midgard Golden Egg rune, including where you might find one.

The Golden Egg rune is a bit of a mystery and it’s unclear what its true purpose is. Like other runes, it’s a random drop from enemies and doesn’t seem to be particularly rare. But where other runes explain their uses, the Golden Egg’s description is cryptic. It reads:

It can be sold for 200 Souls, though that hardly makes it worthwhile as Souls can be picked up easily from doing pretty much anything in the game. If trading for Souls is its only use, perhaps it’s meant to be saved for emergencies? That seems a bit of a stretch, though.

There’s some speculation on Reddit that you can gain more Golden Horns when you end a game early using the Bifrost—a method that allows you to abandon a game with the Golden Horns you’ve accumulated—provided you’ve unlocked it. Another suggestion is that it increases the drop rate of runes.

Whatever the Golden Egg rune does, it’s probably worth hanging onto it if you happen to find one. I’ll make sure to keep this guide updated with any new information that emerges.