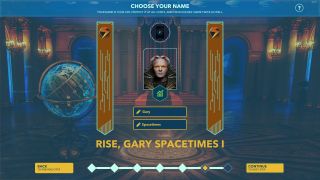 Emperor Gary Spacetimes is in a heap of trouble. Not only has he inherited the Imperial Space Throne at the tender age of 18, but soothsayers across the galaxy are predicting complete civilisational collapse within the next twenty years, as resources grow scarce and planetary populations reach breaking point. Gary’s only hope is to reunite the six great houses that form the backbone of the Imperium. But those houses have designs of their own and, if Gary isn’t careful, his reign won’t last two years, never mind twenty.

Such is the premise of Alliance of the Sacred Suns, which is what you’d get if you crossed the novel Dune with Crusader Kings and then beat the resulting hybrid to death with a kaleidoscope. It’s a game with grand ambitions and plenty of ideas, but a few of its design decisions left me a little concerned for the final product.

While Crusader Kings is the most obvious comparison point for Alliance, there are a few major differences between the two games. For starters, Alliance is turn-based rather than real-time, which means the game has a very different flow compared to Paradox Interactive’s grand strategy. More importantly, there’s no dynastic element to Alliance, no passing of the torch between rulers and heirs, and no choices regarding the role you play in its universe. You are the Emperor, whether you like it or not, and you’ve got one shot to prevent galactic civilisation as we know it from crumbling into space-dust.

A game of Alliance starts off with you creating said Emperor. You give them a name, choose a portrait to represent them, and assign a House ‘tradition’, which determines your prowess in areas such as farming, academia, and energy production. The game then proceeds to an overhead view of a galaxy map, split into several constellations somewhat confusingly known as “provinces”. Each province comprises multiple star systems, which in turn contain various planets ranging from lifeless ice-balls all the way up to resource-abundant Super Earths.

Initially, you’ll only control one or two planets directly, known as your holdings. While you can acquire more, and it can be prudent to do so, that isn’t really the point of Alliance. Your ultimate objective is the integrity of the Empire as a whole, achieving which requires a more nuanced approach than making naked land grabs for personal gain.

Successfully managing and expanding your empire involves a delicate mixture of diplomacy, intrigue, economics and military might. Moreover, you must take care in what you choose to prioritise. You only receive a handful of action points per turn, and it’s frighteningly easy to burn through them. On the second turn of Gary Spacetimes’ reign, I was bombarded with calls for attention by various figures throughout the empire, ranging from House Heads asking for resources, to random courtiers wanting to “spend time” together. I naively tried to heed all these calls, not realising that simply reading some of these notes costs an action point. By the time I’d finished, I’d burned through all my AP, leaving me unable to enact any of my plans for the turn.

Although this was annoying, it taught me the first rule of running an Empire: learn who to ignore. There will always be more problems than you can effectively deal with, so you need to focus on what needs to be done, what can be most realistically achieved, and what will best benefit both you and the Empire.

To that end, one of your most important goals is surveying the political landscape between you and the other Great Houses. Your relationships with the various houses don’t start off equal. Some will be friendly or indifferent toward you, while others will have vendettas or may have even sworn vengeance against you.

The reasons for behind these vendettas are not made clear by Alliance, which is a shame, but it also doesn’t matter. The point is they don’t like you, which will affect your approach to uniting them (though sometimes vendettas can be resolved simply by saying sorry, which is nice). Friendlier houses can be brought into the fold with compliments, support for their projects, and the occasional bribe. These House Heads can then be stuffed into the Galactic Council, where they can influence votes on issues such as whether to cap domestic spending, or whether to curtail the Emperor’s power.

More belligerent houses are trickier to deal with. If you’re powerful enough, you could simply force their house leader into exile or remove them for their post. But it’s unlikely you’ll be able to do this early on. In which case, a subtler approach might be required. Like Crusader Kings, Alliance has an entire system dedicated to subterfuge, which revolves around characters known as “Inquisitors”. These interstellar spies can be dispatched into rival houses to covertly monitor their activity or perform heavier handed actions such as assassinations. Alternatively, Inquisitors can be used to unravel the plots and schemes of other houses, the information from which can be used to have conspirators arrested, thereby removing them from the power structure.

But the most effective way to influence houses of all stripes is simply giving them things to do. Expanding the Empire is achieved through Projects, which include scouting new systems, colonising planets, and building new infrastructure like trading hubs. Each Project is overseen by a project leader of your choosing, and is supported by three ‘Contributors’ who excel in a relevant field of expertise. Completing Projects increases the Power of both the Emperor and those who partook in its completion. Consequently, all Houses want to be selected to do the Empire’s good work, and will be more amenable to you if they’re included (and offended if left out).

I like this side of Alliance, the way it attempts to simulate the burden of duty that comes with power, all the wearisome games you have to play to massage bruised egos and channel the ambition of rivals so that it’s useful without being a threat. Alongside the more dynamic political wrangling, most turns commence with a bespoke, Crusader Kings-style event that helps define your leader’s character. It could be as simple as imagining what kind of leader you’d like to be, or it could be more specific, such as how to respond to a colony that has suddenly cut off all communication.

At times, Alliance made me feel like Duke Leto Atreides, shouldered with a responsibility that I didn’t want, forced to deal amicably with people who quite clearly want me dead. But Alliance also made me feel like Leto Atreides in another way, that the game itself was actively conspiring against me, being wilfully obtuse and withholding information for reasons beyond my comprehension.

I simply could not figure out, for example, how I was supposed to effectively manage my economy. I understood the broad goal, which is to increase your Gross Empire Product (GEP) to support your annual budget. The higher your GEP, the easier you can account for your spending on your Military, Domestic needs, Intel, and so on, each of which affects the stability of your rule in different ways (e.g. higher military spending increases your subjects’ fear of you). The actual mechanics of increasing your GEP, however, were completely beyond me.

It’s entirely possible that this is my fault, and that I simply overlooked an important button or tooltip. But Alliance’s UI design is not much help in this regard. It’s also worth noting Alliance isn’t the prettiest looking grand strategy around. The planets look nice, but the character portraits are stunningly ugly. The biggest eyesore, however is the UI, an assault of clashing colours and wildly varying font sizes that makes it extremely hard to parse the information it displays.