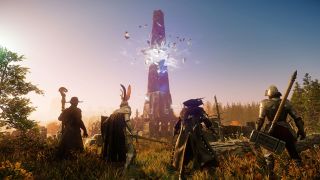 There’s a lot of pressure on New World. The early modern fantasy MMO is Amazon’s latest attempt to develop a PC hit, something the tech giant has had a tough time of so far: competitive shooter Crucible released, unreleased, and then was canceled, and multiplayer brawler Breakaway was canceled before leaving alpha. Perhaps that’s partially why New World was delayed into 2021. Two false starts can be handwaved given Amazon’s enormous bank account, but three would look a bit dire.

New World has always seemed like the Amazon game that’s most likely to succeed, though. In part, that’s because of its sensible design and scope. The past decade has seen a wave of Kickstarter-backed MMOs with huge promises: EVE Online-like levels of intrigue, with bustling dynamic worlds entirely run by players.

With the New World beta at its end, we now know a lot more about what we can expect from the MMO, whether it’s magic, combat, or how its factions, forts, and companies actually work. Below, we’ve summarized everything we know about New World, and what you can expect to find when you wash up on Aeternum at the end of August.

We don’t know if New World will be the next great MMO, but we can safely say that its big hammers look very fun to swing.

There are a variety of different New World game modes for you to try out in Aeternum. Here’s a summary of each:

You wash up on Aeternum, an island of legend which contains veins of a magical mineral called Azoth that both empowers and corrupts. So it’s a lost island of magic and monsters.

There are ruins left behind by an ancient civilization (and guarded by skeletons), natural creatures enhanced by the magic, corrupted settlers, and other baddies to fight. There’s more to the story than just the setting, though, and Aeternum is also filled with plenty of secrets. There’s even a villain, called Isabella, who you can see at the end of this trailer.

There’s a PvP territory control element to New World, but it isn’t a totally player-driven sandbox. If you want, you can spend all of your time fighting monsters, leveling up, and finding or crafting new gear. You can group up with other players to take on world events or attempt a boss fight. You don’t have to pay much attention to player politics at all, and can play New World like a standard open-world RPG: Explore new areas, kill new things, find new resources, craft new stuff.

If you want to fight other players in the open world, you can turn on your PvP flag once you join one of world’s three factions. If you’re killed by a player from another faction, you only lose some equipment durability, and maybe some pride and time. Your reward for opting into PvP is extra experience points for everything you do.

There are three different New World factions that you can join at level 10, letting you become part of a company, and fight in faction wars and events:

Your faction can’t be changed once you’ve chosen it, so make sure you choose the same one as your friends—unless you want to fight them, that is. There are also four enemy NPC factions:

If you want to really get involved in New World’s social side, you can found or join a company. Companies are 100-player groups—New World’s guilds, basically—which can take over and govern territories. These companies are affiliated with one of the game’s three factions, and inherit the faction of their Governer (the person who created the company).

New World’s island setting is divided into territories, and can be further divided into settlements, which act as player-hubs for crafting, quests, inns, buying houses etc. Each territory also contains a fort, but once that fort is claimed by a company, it falls under their control and that of their parent faction. This fort can be taken away by another company, but first they must declare war, having first undermined the company’s influence in that territory.

It sounds complex, but it’s basically a system that means you can’t constantly steal forts back from each other, as you have to fulfil the conditions for declaring war first. A Governor sets the tax level, which affects how much certain actions in the territory cost, and can then use this money to organise public projects, upgrade the settlement and the fort, or just take it for themselves—though the players in your territory might not be too impressed. The Governor can also deputise Consuls to help them out with management.

Yep. At level 20, you can buy a house in a settlement, and it’ll act as a respawn or fast travel location. It’s not going to be in a unique plot—many players can ‘own’ a house on the same plot of land, but once they enter they’ll see their personal version of the interior, which will be customizable with decorations and furniture (some of which can provide you with buffs out in the world). You can bring up to four players with you into your house to hang out.

At level 40, you can buy a second house, and at level 60, you can buy a third house, allowing you to quickly fast travel between three settlements. Buying a house in a settlement is a good way to get involved in that particular territory, so be sure to pick one with a low tax rate.