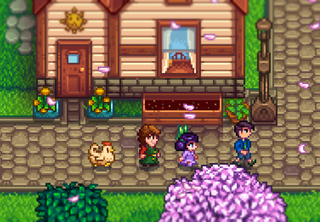 Stardew Valley is a very good game that its creator is working tirelessly on, but so are the game’s modders. The biggest fan-made mod, Stardew Valley Expanded, keeps growing, too.

Patch 1.13.9 brings a lot of changes, but there’s one I reckon anyone would be excited about. Charlie, Shane’s prized chicken friend, is now an NPC, meaning that it will follow Marnie, Jas, and Shane around once you’ve cleared Shane’s eight heart event. Another character has also been turned into a non-social NPC, but creator FlashShifter has kept that one a surprise. Who wouldn’t want to see more of Stardew’s knobbly animals on a day out in town?

However, it feels necessary to point out that Charlie is a non-social NPC, which limits your own interactions with him. That means, no romancing the chicken. You can, however, enjoy a new 12 heart event for Shane, and after the 14 heart event, he will start cleaning up after himself, stop drinking and start loving any chicken-related products instead. The turnaround we’ve all been waiting for.

Of course, that isn’t all the update has to offer. FlashShifter added a festival called “Joja Day”, which has residents flocking to your fully upgraded Joja Mart on the 22nd of every season. It sounds like the Black Friday of Stardew. Willy got his own room, so he presumably doesn’t have to sleep with the fishes (anymore). You can also now chill with Abigail on the couch in the saloon.

Among plenty of visual changes are optional alternative looks for craftables such as the beehive, kiln, and mayonnaise machine, as well as redesigns of old and new areas have gotten a redesign, including new sprites and animations.

Check out the patch notes on the wiki, it’s truly too much to list. If you’re taking the plunge with SVE for the first time, the wiki also contains a guide on how to install the mod. And if you’re a Stardew fan, you really should—SVE adds 25 new NPCs, 32 locations, 220 character events, and 850 location messages. It even reworks parts of the base game, making it a whole new Stardew experience that still stays true to the original.