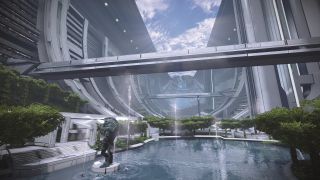 Everything else aside, Mass Effect’s Citadel is just a great piece of science fiction. This colossal 44km long space station was built generations ago – it’s presumed by the extinct Prothean race, although no one’s really sure. Thousands of years later, it’s now populated by dozens of different species, and has become a galactic hub for trade, diplomacy, and, of course, drinking in its many neon-lit bars. It’s basically a giant floating space city, with 13 million souls living and working there.

The Citadel is BioWare’s take on the O’Neill cylinder, a fanciful space settlement dreamed up by American physicist Gerard K O’Neill. He proposed the idea in his 1976 book The High Frontier: Human Colonies in Space, which features some incredible illustrations.

One famous drawing from O’Neill’s book in particular could be concept art for the Presidium, the bustling heart of the Citadel. This is the first area of the station you visit in Mass Effect, and it’s still an impressive sight. The Presidium is a huge ring with a simulated blue sky, leafy green vegetation, gleaming white architecture, and anti-grav cars zipping past. These visuals, combined with Jack Wall’s stirring, atmospheric music, make this one of the most memorable locations in the game.

When Shepard arrives in the Citadel, there’s a lot to do, including formulating a plan to save the galaxy. But that can wait. Before I even think about driving the story forward, I love hanging out in the city, talking to people, and working my way through the selection of sidequests on offer there. The first game’s version of the Citadel is composed of two distinct areas: the aforementioned Presidium, where bankers, diplomats, and other high-society types hang out; and the Wards, residential districts where regular citizens tend to spend their time. It’s actually a pretty small map, with the illusion of, rather than real, scale, but it works. You forget that everything’s happening in the same handful of corridors.

As you explore these two very different sides of the Citadel, picking up sidequests and nosing into people’s business, you get a sense of what life is like on the station. Few sci-fi games give you this kind of slice of life experience. Shepard settles a dispute between two scientist rivals, deals with an overenthusiastic fan, works with a journalist to expose a corrupt club owner, and other low stakes tasks that add detail to the setting and make it feel like a real, functioning place. And the ambience of the Citadel is so incredibly chill, running around doing these odd jobs never feels like a chore.

I also love the Keepers. These insect-like creatures can be found all over the Citadel, tinkering with control panels. They seem unaware of their surroundings, and no one really knows where they come from. For as long as the Citadel has existed, they’ve been scurrying around it, silently repairing things, and keeping the place running. This adds to the mystery of the station’s origins, and it’s a superb piece of world-building. Mass Effect takes a lot of its best ideas from the mature science fiction of the 1960s and ’70s, but it has enough of its own personality and imagination not to feel derivative.

The more you play the Mass Effect trilogy, the more you learn about the truth of the Citadel, the Keepers, and other elements that are initially enigmatic. But even when you learn about its true purpose, it’s still a fascinating setting, and one of the best virtual cities BioWare has ever created—and this is a studio that has created some of the best, from Baldur’s Gate II’s Athkatla, to Knights of the Old Republic’s Ahto City. Exactly what the next Mass Effect game will be, or when it’ll be set, remains to be seen, but I hope we return to the Citadel in some form.