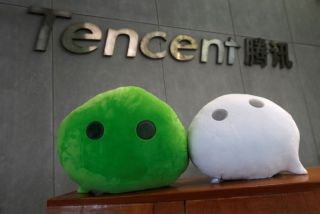 Early on Tuesday the stocks of several gaming companies, Tencent among them, fell sharply by up to 11% at Hong Kong markets, after the Propaganda Department of China’s Communist Party announced at the ChinaJoy expo that video games needed to be “good, clean and secure”. Shares of companies like Tencent, NetEase and XD started tumbling in response. The shares of China Mobile Games and Entertainment Group (CMGE) even fell by a whopping 20%.

Several gaming companies from elsewhere in Asia, including the Japanese giants Capcom, Konami and Nintendo, also took a hit, but not to such a degree. While at the time of writing, Tencent shares have recovered to -6%, the company has lost a total of $110 billion since the start of last week.

Shortly afterwards, a newspaper managed by China’s official news agency Xinhua published a report calling video games ‘spiritual opium‘ with a harmful effect on teenagers, and called Tencent out specifically as one of the main drivers of this.

Publications ran by Xinhua are regarded as representing the Chinese government’s official stance, but there was a bit of an about-turn on this one and the article has been deleted. Nevertheless the phrasing rang alarm bells, as the report was similar to an article that ran in another newspaper affiliated with the Official News Agency roughly twenty years ago, calling games ‘digital heroin’. While the Chinese government is generally interested in growing its video games industry ever since ending its ban on console gaming, insiders have noted that China’s president Xi Jinping isn’t a huge fan of games:

To understand why a single remark made such waves, we have to look at the influence of regulators on the Chinese gaming industry. Back in 2018, regulators became aware of the potential harm of in-game monetisation and loot boxes and suspended monetisation licenses. Measures such as Tencent using facial recognition to stop children from gaming all night and designing 12 rules for streamers to foster “healthier environments” are direct responses to government regulation—all in an effort to keep gaming child-friendly.

Companies are afraid of angering regulators in China, since crackdowns can effectively mean the downfall of entire industries. Roughly two weeks ago, China banned off-campus education, as education shouldn’t be a source of profit, leading to massive closures and job losses in the online education sector. The fear is that should regulators find gaming unsuitable for children for whatever reason, this could spell the end of gaming as it currently exists in China.

Tencent has since released a statement promising to further limit play time for accounts registered to minors, to an hour during weekdays and two hours during school holidays and national holidays. Following a recently announced age-based rating system for games in China, in this statement Tencent is now also thinking about banning its games for children under 12 altogether.