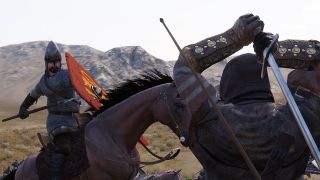 A new Mount and Blade 2: Bannerlord patch has dropped, bringing a heap of changes and fixes to the open world RPG. Most of the changes have been tested in beta for the past month or so, but they’ve now been patched into the game proper. Just as a squire becomes a knight, so too do these once-young fixes become public.

Some of the more notable changes in version e1.6.0 include an ironman game mode in singleplayer, for those looking for a hardcore, no-second-chances experience. Once you select the ironman option during character creation, you can’t turn the mode off again. It’ll confine your campaign to a single save file, with each save overwriting the last. Watch your step, in other words.

There’s also a fun sounding duel mode in multiplayer, so two players can go at it one-on-one. A special map has been created for duels, called Proving Grounds, which has different areas zoned for infantry, cavalry, and ranged combat. Each zone has multiple arenas for your duels which should keep things fresh from fight to fight. The first player to triumph in three rounds of combat, wins.

There’s lots more in the patch notes: a quick text-search for “crash” turns up nearly 40 instances of the word in both singleplayer and multiplayer, so if you’ve been having issues with stability hopefully the patch addresses them. There have also been a number of tweaks to the UI which should make things like party management and encyclopedia sorting easier.

Some bonuses and penalties pertaining to the culture of your character have been adjusted as well, and starting attribute points and focus points in character creation have been increased. A new crafting feature has been added, allowing you to craft weapons for notable characters, which can increase your standing with them (or decrease it, if you don’t deliver to their expectations) as well as allow you to earn some extra gold and XP.

You can read the full patch notes here.