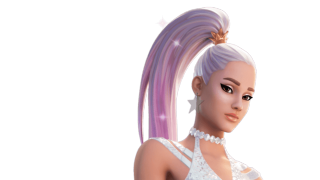 With the official announcement that Ariana Grande is holding a concert in Fortnite, fans are going absolutely bananas wondering when they can spend their valuable V-bucks on the Ariana Fortnite skin.

But how much will the Ariana Granda Fortnite skin cost? We’ve scoured all of Fortnite’s official announcements plus those valiant data miners digging into the details so we can give you the full rundown.

The Ariana Grande Fortnite skin (and all other cosmetics) will hit the Fortnite item shop on August 4 when the page resets for the day, according to HYPEX.

How much will it cost? Sadly, there’s no known price just yet, whether it’s through official announcements or leaks. We’ll be keeping an eye out for that information, but given past Fortnite events with big tie-in skins, we’d estimate that Epic will offer a few options. Just buying the Ariana Fortnite skin will probably cost somewhere between 1,200 to 2,000 V-bucks, while a bundle including all of her various cosmetics will probably cost 2,000 to 2,800 V-bucks.

We know there will be at least two versions of Ariana Grande’s Fortnite skin. Below, we’ve got a version that decks Ari out in brilliant white crystal sequins. At least I think that’s sequins. Look, I don’t know fashion. I work in a hoodie.

The second version of Ariana’s Fortnite skin is a little less shown off, but thanks to HYPEX, we’ve got a recording of Ari’s kiss emote while she’s wearing the second outfit. It’s much more extravagant, with a giant crystal collar and skirt, all of which pulsates with some sort of energy. I love it.

Perhaps most importantly, we’ve got one of the most incredible back bling items I’ve ever seen. Ariana Grande’s real-life pet pig, named “Piggy Smallz,” who bounces to the beat of an unseen bop.

Epic is kicking off a short series of challenges that lets you earn three other cosmetic items. These include a the “Riftser-piece spray,” the Cloudy Kitty emoticon, and a new loading screen dubbed “Cosmic Cuddles.”

Anyone who attends Ariana’s concert will receive a new glider made out of the skin of a dead Cuddle Commander. Hannibal Lecter would be proud.

Good news for Fortnite Crew subscribers. If you’re a member of the monthly bonus subscription, you’ll receive a different version of the glider, another spray, and another loading screen. The only catch is you need to log in sometime between August 5 at 10 AM ET to August 9 at 10AM ET.

The Ariana Grande Fortnite concert is being held at several different dates and times so more folks can get in on the party. Here’s the full schedule below.

Epic recommends that you boot Fortnite up 60 minutes before the show. The playlist update, which lets you select the special event, will open 30 minutes before showtime.

You’ll also want to make sure your copy of Fortnite is properly updated to v17.30.