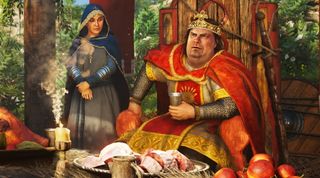 Whenever I play an Assassin’s Creed game, the one thing I think is god I wish they’d change this open-world des… food! I think about food. Of course I do. And now, a new entry in the why-did-they-make-this videogame merchandise category, comes Assassin’s Creed: The Culinary Codex. It’s a cookbook.

It also seems like an ever-so-slightly mean cookbook, containing “40 recipes across ten full menus.” I’m a bit of a traditionalist so prefer my cookbooks to come from the likes of Gordon Ramsay, and the nearest one to me is Cooking For Friends: it cost £25 and contains 116 recipes. Size isn’t everything of course, but with this tome retailing at $30 you’re talking just under a dollar a recipe.

Not sure you’ll learn much either. The menus are “inspired by the times and places where the most famous Assassins lived and fought: you can relive the highlights of the Italian Renaissance, the French Revolution and even Victorian London. Follow Altaïr, Ezio, Arno, Evie, Jacob and all the Assassins of the Brotherhood while enjoying their most celebrated dishes: Masyaf Moutabel, Davenport Homestead Soup, Boston Apple Pie, Colonial Coleslaw, Meringues Mirabeau, Rooks’ Bread Pudding and many more.”

I obviously haven’t read the book but this looks a little like a bunch of fairly standard recipes: do you need Ubisoft to tell you how to make an apple pie?

Not that it would be Ubisoft themselves of course, and perhaps I’m being unfair. The book is written by one Thibaud Villanova and is in fact an updated version of a text from a few years ago (it was originally published in French; this is the first English release), and Mr Villanova has led a very interesting career as, essentially, a chef of imaginary dishes.

He’s a productive sort too, and among his books are a guide to the banquets of Asterix, a Star Wars cantina cookbook, Disney recipes, more general collections of fantasy food under his ‘Gastronogeek’ brand and, my favourite of all, a Dragon Ball recipe book. Assassin’s Creed may seem to fit less neatly in that culinary lineage but, hey, even trained killers have to eat.

Assassin’s Creed: The Culinary Codex will be published by Titan Books on December 14, 2021. You can check out its store page here. Best of luck but, even if it makes me an idiot sandwich, I’m sticking with Gordon.