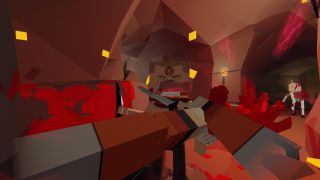 Paint the Town Red is a bizarre first-person melee combat game with voxel-based enemies and objects. That means you can use pretty much any object in the game as a weapon, but it also means you can lop enemies’ limbs and heads off, and you can even knock the weapons out of their hands. So over-the-top improvised violence is very much the order of the day here, but the combat is couched in two campaign styles: there’s a roguelite dungeon crawler and also ‘Scenarios’ which range environments like a bar, a disco and an old west saloon. The game has been in Early Access for a while and this is its 1.0 launch, so now’s a better time to check it out than ever.

Here’s a unique RPG about a group of children commandeering a giant mysterious tank. Dubbed the Taranis, this tank has a bunch of weird supernatural characteristics, which should prove useful for the children as they avenge the destruction of their village. The tactical element here comes from managing this unwieldy vehicle of war: all of the kids have different strengths and weapons, so you’ll need to think hard about what aspect of the tank you want them controlling. It’s an unusual premise, and coupled with the Miyazaki-inspired art style, seems genuinely original.

Here’s a first-person horror set on an abandoned Mediterranean island, and before you ask: It’s called ‘The Wine’ because you are actually hunting a bottle of wine. This wine isn’t important because it’s Friday night and you’ve had a big week, it actually has healing properties needed to cure the protagonist’s pandemic-affected family. Watch out though, because someone doesn’t want you to have it (and spoiler, they’re probably scary, this being a horror game). Horror Tales: The Wine looks really gorgeous, and in among the exploration and scares you’ll also need to solve puzzles and riddles.

Here’s a retro first-person shooter that looks like it was made in the Doom (1993) engine. The name is apt: This is a garish and disturbing looking game, mixing the pixel style of Wolf 3D engine shooters with the surrealist paintings of Zdzisław Beksiński. In addition to being a shooter Vomitoreum is also a Metroidvania, so expect a big focus on exploration, as well as upgrades to “movement and mobility that consistently re-contextualizes previously explored areas.” Looks cool.

You guessed right: Eldest Souls is heavily indebted to the Dark Souls series, though it takes a different form. It’s a top down pixel art action game with “brutally challenging” combat, but like another pixel art game that’s always compared to From’s games, this is focused entirely on bosses. That doesn’t mean you won’t do a fair bit of exploring, but Eldest Souls is all about the gruelling task of figuring out how to take out big baddies. Not the most original concept in the world, but it looks beautiful and the combat looks tight.

These games were released between July 26 and August 2 2021. Some online stores give us a small cut if you buy something through one of our links. Read our affiliate policy for more info. ‌